First publised in Cinematical (March 24, 2011) by Eric Davis..☛..“We loved our time in the Arara village, & @JimCameron introduced me to Raoni, the leader of the Kayapo who came to meet.” — Arnold Schwarzenegger via Twitter. With rumors of a True Lies 2 spreading across these here internets (thanks to a very talkative Tom Arnold), coupled with the fact that Arnold Schwarzenegger is currently on the hunt for his first movie following his time in office as governor of California, you can see how we’d certainly be interested in a news story about Schwarzenegger traveling into the jungles of Brazil with his old friend (and director) James Cameron. Though Cameron fell off the Twitter bandwagon soon after Sanctum hit theaters, Arnold Schwarzenegger is a little tweet-a-holic. The former action star and politician has been tweeting up his “Brazilian adventure,” posting a video of their helicopter landing on the Xingu River (watch it below). So what’s really happening here? Is Cameron researching Avatar 2 and 3, and taking Schwarzenegger along for the ride just because? Is this simply a humanitarian visit for the duo, with no impact on any future project for either man? Are they scouting locations for True Lies 2? Or is it all for that Amazon tribe doc Cameron was reportedly working on back in September (the likely answer)? Naturally we can speculate all day long, but we wouldn’t be surprised if Cameron invites Ahnuld to be part of the next two Avatar movies. That’d certainly be a grand way to return to Hollywood, no? 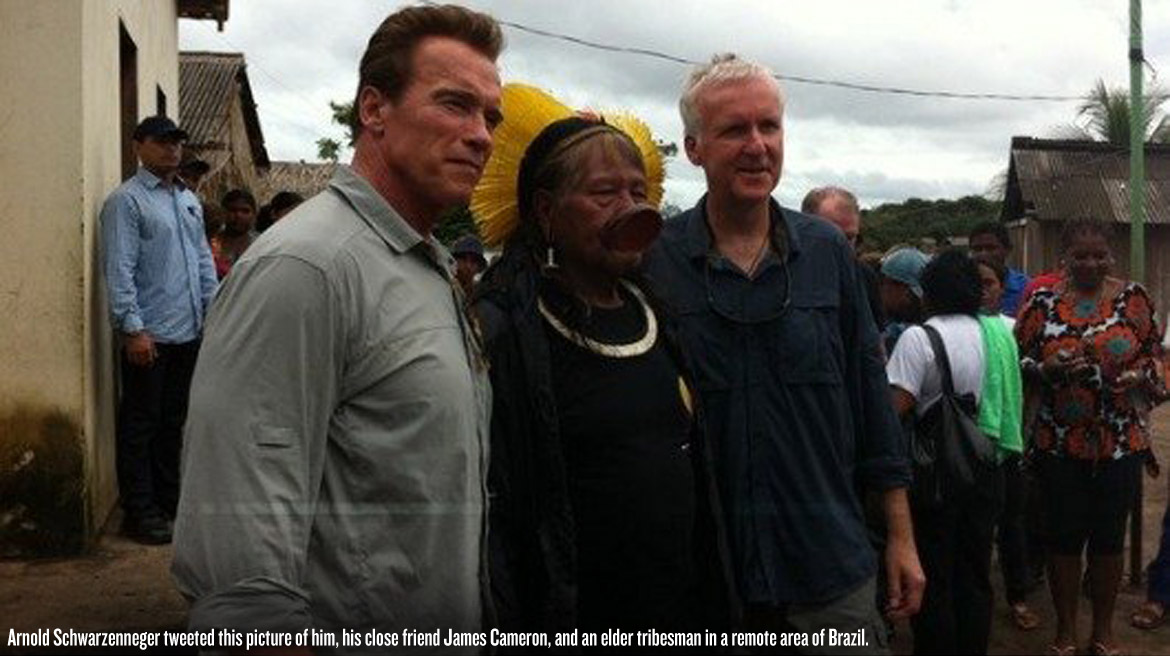 Previous post:
The Darkly Colorful Prints Of No Pattern’s Chuck Anderson Next Post:
“Godless In Tumorville”: The Telegraph Sits Down With Christopher Hitchens To Talk About Cancer, His Children, And The Mortal Sin Of Despair