The New Materiality Of Shadows

First publised in Architonic by Susanne Frit..☛..For hundreds of years artists and architects have been fascinated by cast shadows and perspective – the two shaping factors of spatial representation. Today the direct control of production machinery by means of digital design tools imparts an entirely new complexity to ‘optical reliefs’, which not only enable any image to be created as a cast shadow, but also make it possible to represent a multiplicity of images in one relief surface. Another new factor is the potential for industrial production, which opens up fully new possibilities for architecture in particular. Below we present three recent examples of shadow research. Cast shadow reliefs are a new technique for uniting and depicting one or more images in one physical object. For this purpose a motif is converted into a quantity of pixels and transformed into the black and white format. A third dimension is now added to this grid of pixels and a relief is created. The greyscale of the black and white pixels in the image receives the specific geometry of the relief pixels.

The simplest case is an optical relief with pictorial information which becomes visible when the light falls on it. In the image below the New Zealand agency Clemenger BBDO has developed a relief made of pegs which vary in length and accordingly cast differently sized shadows. When the sun shines on it the image of a sunbathing woman becomes visible. The subline of the advertisement promotes suntan lotion: “Makes sense when the sun’s out.”

Such peg reliefs on a relative scale can also be used on facades. In the facade studies which are shown below polyurethane moulds are used for the concrete. The difference in the height and positioning angle of the pegs (see illustration) towards the left, right, upwards and downwards creates changing shadow images as the angle of the sunlight changes in the course of the day. Picture puzzles were used by artists as early as the middle ages, in order for example to convey a hidden message which is only revealed to the observer from a specific perspective – in other words the observer’s position determines the nature of the perception. Drzach & Suchy’s artistic work is based on a further fundamental observation, which is independent of the point of vision of the observer: the shadow which is cast by a physical object is dependent on the intensity and location of the light source and the shape of the object. Whereas Drzach & Suchy use shadow casting technology more for artistic purposes than in terms of practical applications, the Canadian artist Roderick Quinn has developed a product which is ready for series production.

His ‘Optical Tiles’ can be used in the planning of interiors, facades and in spatial planning. Quinn’s product included a further dimension, because it’s not just the location of the light source which plays a role but also the location of the observer. As a result the image becomes dynamic and creates an impression of animation. 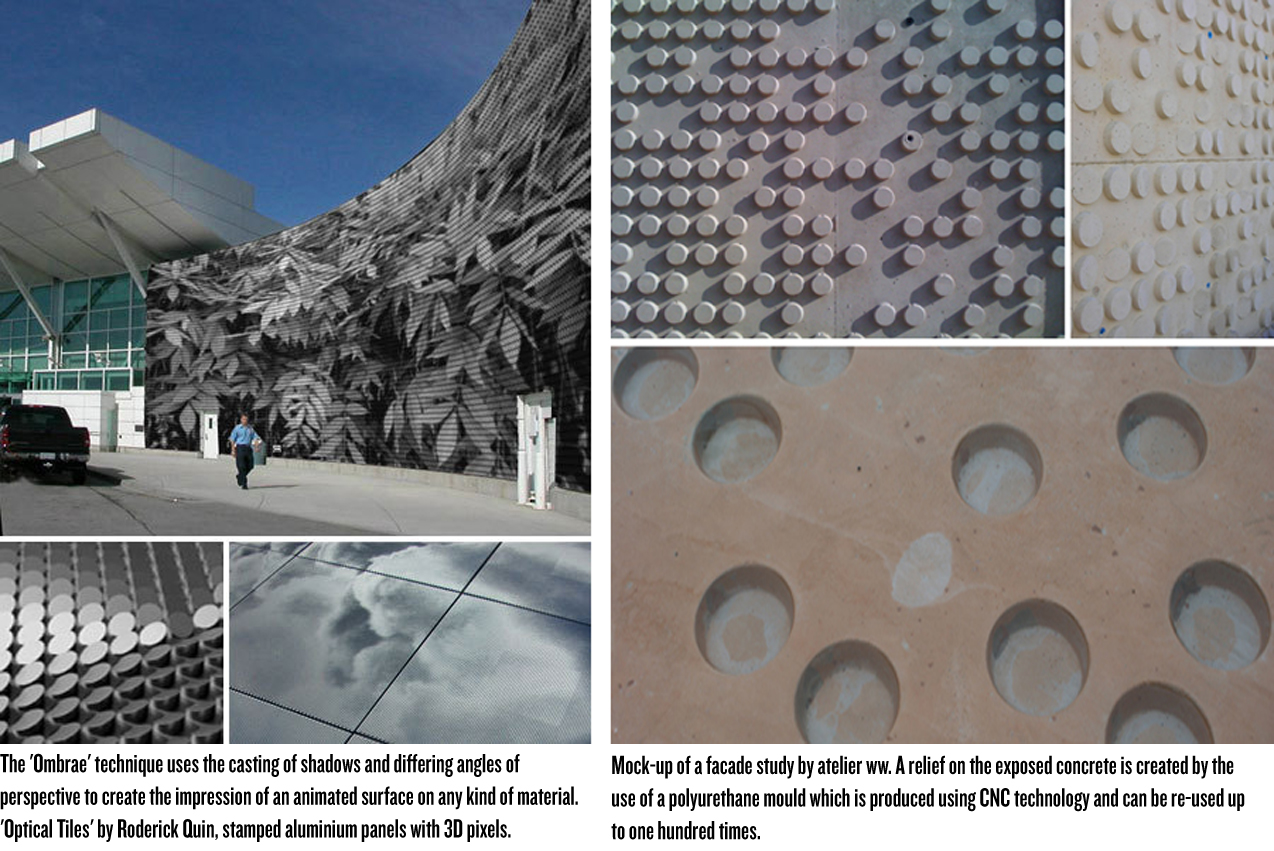 ‘Ombrae’ after the Latin word for shadows is the name of his technique, which after a development process lasting years is now ready to go into full-scale production. Once the digital data has been fed into the computer the dots are converted into 3D pixels with differing angles, and can then be directly stamped out of aluminium panels. Although this also enables large-scale series production, the real attraction is of course that the product can be ‘made to measure’ in a relatively easy way by simply changing the motif. However, Quinn’s most valuable product is in fact a service – his ‘Ombrae’ technology represents concentrated know-how with a valuable planning service. By means of specially developed software and CNC technology it is possible to make an optical relief out of almost any material – the material as such becomes the image. In the process, however, a wide range of factors have to be taken into account: it’s not just the greyscale of the pixels which are converted to 3D pixels and the lighting conditions at the place of application which play a role, but also the surface features, colour and reflectivity of the material. In addition to its design potential Quinn believes that his ‘Ombrae’ technology can optimise the characteristics of surfaces with regard to heat storage, the cooling of buildings and energy generation. 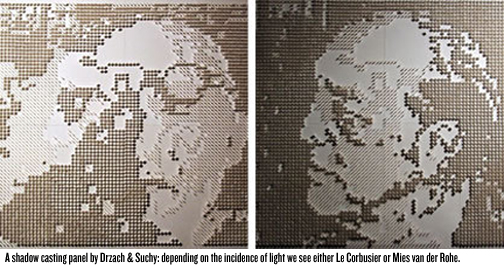