First publised in Popular Science (March 10, 2011) by Theodore Gray..☛..On July 2, 2007, Scott Showalter climbed into a manure pit on his Virginia farm to clear a blocked pipe. Moments later, he fainted and died. An employee of his went in to save him but was quickly overcome as well. One by one, his two daughters and wife followed, only to die trying to save the people who went before them. The culprit was invisible, odorless, tasteless methane gas, which had collected in the enclosed pit. The sensation you normally experience when suffocating—the painful struggle to breathe—comes not from lack of oxygen but from a buildup of CO2 in the bloodstream. That’s why an asphyxiant gas is incredibly treacherous: If you are clearing your lungs by breathing it in and out, the CO2 buildup does not occur, and you don’t notice anything wrong before passing out.

It’s difficult to visualize how gases could pool in a confined area. But it turns out their behavior is very much like that of liquids, so much so that you can create layers of gases of different densities—and even float boats on them. Sulfur hexafluoride (SF6), typically used as a spark suppressant in high-voltage equipment, is an invisible gas that’s nearly five times as dense as air, making it ideal for a demonstration of this phenomenon. After allowing SF6 to slowly fill an aquarium, I slid off the cover, leaving a pool of invisible gas that would stay put for several minutes. When I set a lightweight tinfoil boat on top of the tank, it floated on what appeared to be nothing at all. It’s really a magical sight, and a reminder that things are not always what they seem. A septic tank, a well or a mine can look perfectly normal, but if the air in it has been displaced by something more sinister, the only sign you’ll get is the loss of consciousness. You will never know what hit you. 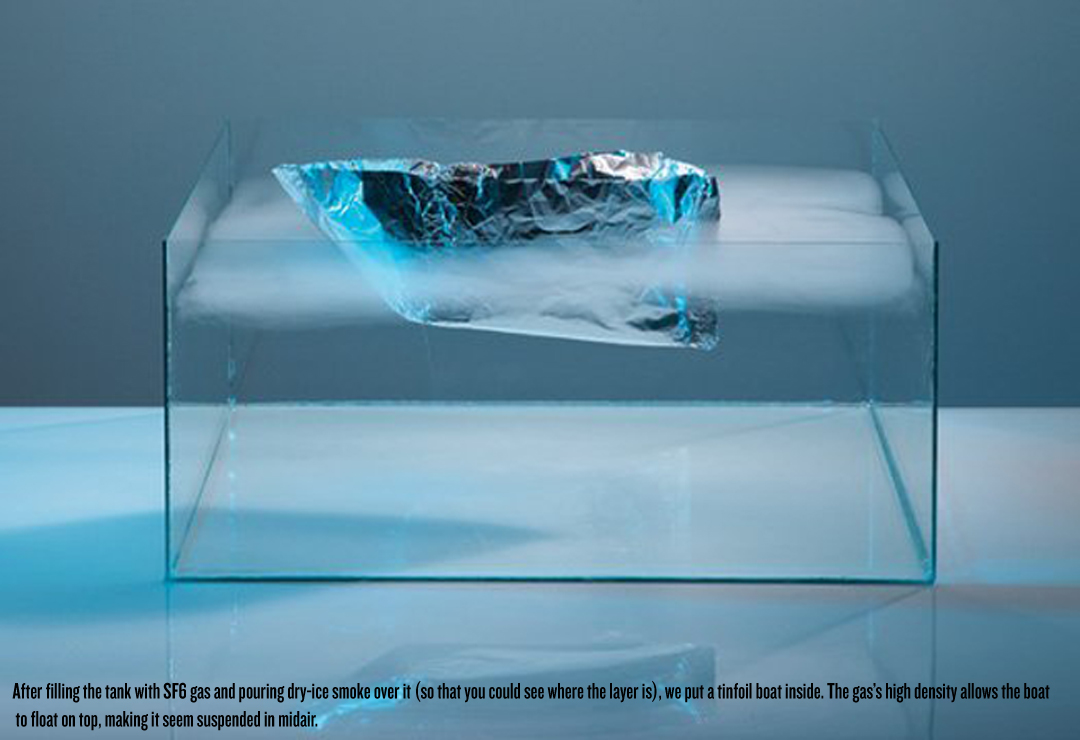 In this video, Theo Gray demonstrates the miracle of SF6 on Japanese TV:

Previous post:
The New Materiality Of Shadows Next Post:
Incredible Infographic Answers The Question: “Does Sunshine Make Us Happier?”