First publised in Gizmag (March 17, 2011) by Steven Hondrogiannis..☛..Chemists at the University of California, Riverside, are developing a future display technology using nanoscale-sized iron oxide rods that shine when exposed to an external magnetic field. Though in its early stages, the research could pave the way for producing magnetically responsive, ultra high-res displays with significantly reduced dimensions and power demands. The researchers have shown in the past that by using a simple magnet, the color of iron oxide particles suspended in water can be manipulated in response to the strength and orientation of a magnetic field. The latest development is the application of silica to the iron oxide particles to form chains of light emitting particles that refract the visible light into brilliant colors when magnetically charged. To do this, a thin layer of silica is applied to iron oxide molecules in a water solution. Then, a magnetic field is applied to assemble the particles into chains. Next, in order to stabilize the chain structure, the chains are coated with additional silica to form a shell, making tiny rods or nanorods. When an external magnetic field is applied, the nanorods align themselves parallel to one another like a set of tiny flashlights. It is the arrangement of nanorods that effectively diffracts light and displays a color, while it is the spacing between the particles that determines the actual color that is shown.

Currently, the process can show a single color as the particle spacing is fixed after the silica coating is applied to the chains. In order to show different colors the researchers explain that the nanorods could be used in clusters of different sizes, effectively varying the interparticle spacing. The researchers are now working on achieving two colors, one at a time. If successful, this would allow a screen or pixel to display one color for a while, and a different one later. “We have essentially developed tunable photonic materials whose properties can be manipulated by changing their orientation with external fields,” said Yadong Yin, an assistant professor of chemistry at University of California. “These nanorods with configurable internal periodicity represent the smallest possible photonic structures that can effectively diffract visible light. This work paves the way for fabricating magnetically responsive photonic structures with significantly reduced dimensions so that color manipulation with higher resolution can be realized.”

Future applications of this research include high definition posters, pictures, and energy efficient color displays. Laptop screens would be much more visible in bright sunlight as the nanorod technology diffracts color from the visible light around it. Battery life would also be greatly extended. Another positive to this technology, Yin says, is that iron oxide is a cheap resource, non toxic and plentiful. The video below shows the technology in action (Video credit: Yin lab, UC Riverside): 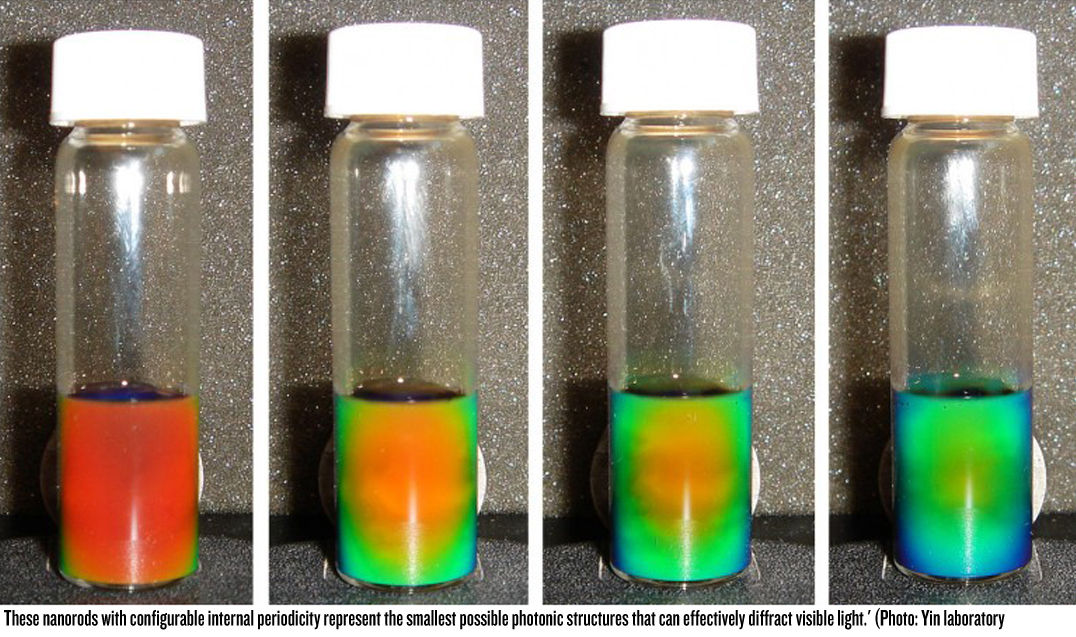