I am a huge fan of the Sun.  I follow it on Twitter and Facebook and I track its every move from the second it rises to the second it sets.  It really is my favorite superstar. I’m also a huge fan of Towleroad which is where I found this incredible image below. They forwarded me to Discover Magazine’s breakdown of what exactly we’re looking at in this pic and it’s much more complicated than one would assume:

This picture was taken by Alan Friedman, who is no stranger to this blog: his picture of the boiling Sun last year was hugely popular, and so amazing I featured it as one of my top pictures of 2010. And with this he’s done it again… and maybe even topped it. Alan used a filter that lets through only a very narrow wavelength of light emitted by hydrogen (called Hα for those of you keeping track at home), so this tracks the activity of gas on the solar surface. He also inverts the image of the solar disk (makes it a negative) to increase contrast. Somehow this adds a three-dimensional quality to the picture, and reveals an amazing amount of texture. I swear I had a rug in my bedroom growing up that was this texture (though somewhat cooler and less burny). The scene-stealer is that detached prominence off to the left. That’s the leftover material ejected from the Sun by an erupting sunspot (you can see other sunspots in the picture as well). The gas is ionized — aplasma — and so it’s affected by magnetic fields. The material follows the magnetic field of the Sun in the explosion, lifting it off the surface and into space. Sometimes it falls back, and sometimes it leaves the Sun entirely. In this case, Alan caught some of the material at what looks like the top of its trajectory. The beauty of this picture belies its violence and sheer magnitude: the mass of material in a prominence can easily top 10 billion tons! As for size, see that dark elongated sunspot near the base of the prominence, just to the right of the bigger, speckly one? That spot is roughly twice the size of the Earth. Making this even more amazing, these images are taken with a 90mm telescope — that’s a lens not even 4 inches across! Superior optics, a good mount, and a steady hand can do wonders. You really need to go and see the rest of Alan’s photography at his site, Averted Imagination. His photos of the skies are surpassingly beautiful.

Be sure to click on the image to open up its hi-res version.  The detail is absolutely phenomenal.
SEE ALSO: NASA Captures Magnificent HD Footage Of Last Week’s Solar Flare Of “Monster Prominence” 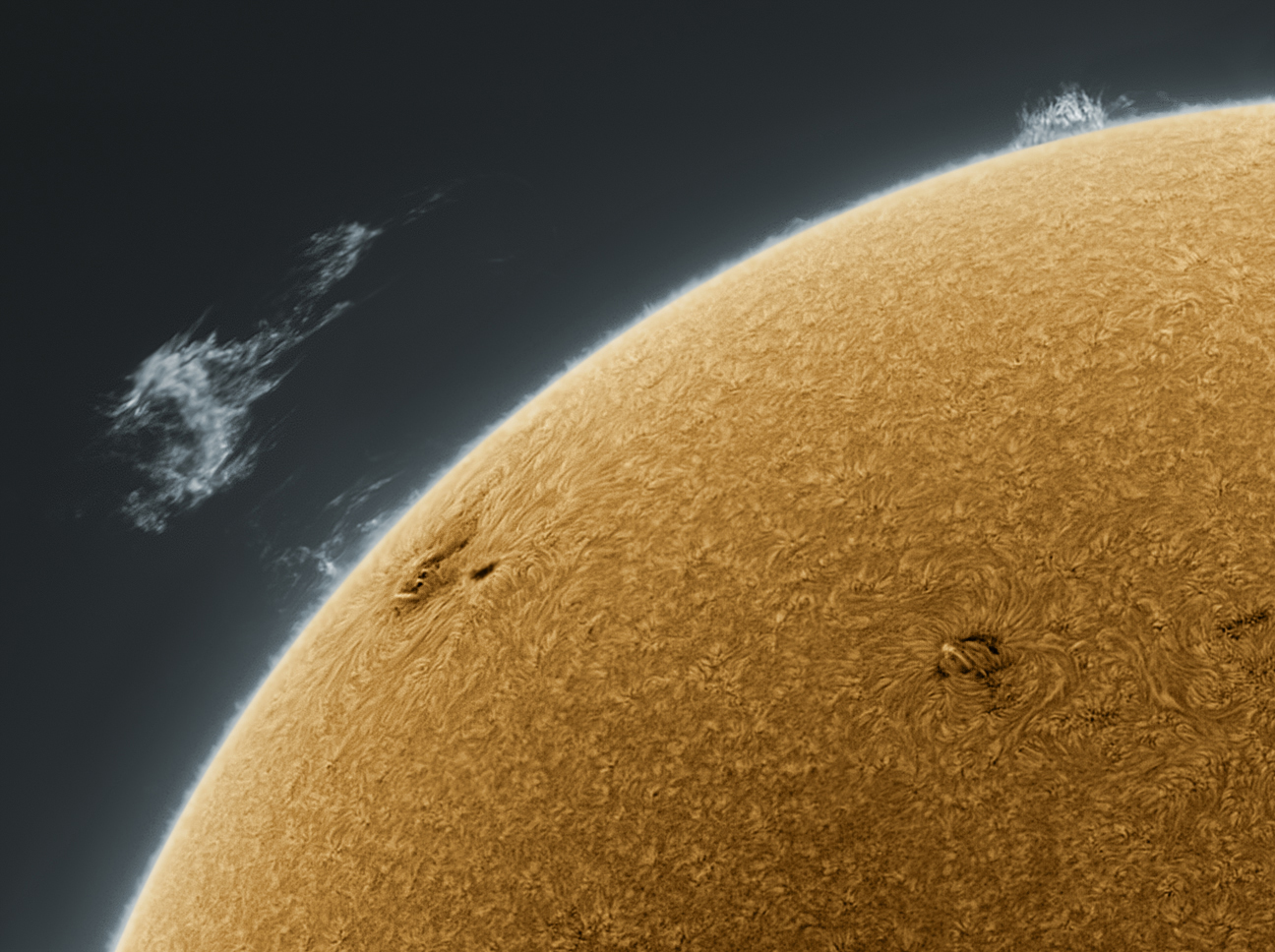