I just discovered this piece in Kurzweil which touches on something we all think about but never want to admit: that cell phone use could be damaging our brains.  Whenever I come across a study like this it always reminds me of old 1950s footage of people spraying DDT on everything like it was no big deal.  Now cigarettes have been exposed not just for their first-hand damage, but their second as well.  If I saw someone smoking in a bar tonight I would be shocked, yet only a few years back it was legal.  I just hope that someday in the future we won’t be watching a similar report on cell phone use back in 2011: “Little did they know how much damage those smart phones were doing.” I’m choosing to not worry too much. But that gets difficult when you read findings like this one in Kurzweil:

Use of a cell phone for as little as 50 minutes at a time appears to affect brain glucose metabolism in the region closest to the phone’s antenna, a new study shows. Nora Volkow, director of the US National Institute on Drug Abuse in Bethesda, Maryland, and colleagues used positron emission tomography (PET) during cell phone use in the on and then off positions and found that although whole-brain metabolism was not affected, metabolism was increased in the orbitofrontal cortex and the temporal pole areas of the brain while the cell phone was on, areas that are close to where phone’s antenna meets the head. “We do not know what the clinical significance of this finding is, both with respect to potential therapeutic effect of this type of technology but also potential negative consequences from cell phone exposure,” she stated.  “Could one use, for example, this type of technology to activate areas of the brain that may not be properly activated and explore potential therapeutic applications of this type of technology?” In the interim though, she recommends using hands-free devices or speaker-phone mode to avoid direct contact of the telephone with the head. [Note: research conducted by British consumer research magazine ‘Which?’ indicates that hands-free headsets may significantly increase your brain’s exposure to radiation because the connecting wire acts as an antenna.]

I’m as interested in the effects of cell phone use on our brains as I am in wi-fi technology and its impact on our health.  I recently heard that wi-fi waves are actually killing our trees.  Like I said, I don’t like to think too much about this stuff.  I think I’m going to calm myself down with a tanning bed session; that always makes me feel so much better. 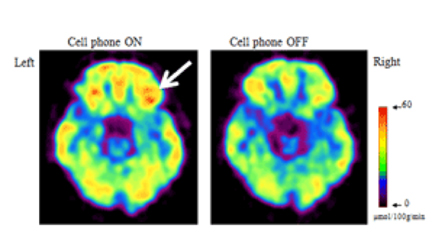 Previous post:
The Most Incredible Image Of The Sun I Think I Have Ever Seen Next Post:
Fascinating Online Gallery Of Late 19th Century Insane Asylum Architectural Floor Plans