“‘Til Death Do Us Part” By Kate Bauman

Today And Tomorrow brought to my attention the work of Kate Bauman, and the beautiful piece featured below.  Entitled “‘Til Death Do Us Part”, it takes the coveted symbol of the wedding ring and turns it into a symbol of violence.  No one is saying that commitment is wrong; that would be ridiculous.  But all too often I’ve seen people commit for the worst reasons and those vows end up biting them in the ass eventually.  Perhaps Kate meant “‘Til Death Do Us Part” as a precautionary warning symbol: take your time, and choose wisely.  Here’s Kate’s bio:

A native of Wisconsin, Kate Bauman began her studies in Metal and Graphic Design at the University of Wisconsin in Madison, receiving her BFA in 2006. She then attended the State University of New York  in New Paltz for an MFA in Metal in 2008. Kate has exhibited in the United States and internationally, notably representing the US at the following exhibitions: Talente 2008 in Munich, Germany; exhibiting inSiamo Qui in Florence, Italy; American Enamels at The Society of Arts and Crafts, Boston; and receiving a juror’s award in Surfacing at The Enamelist Society’s juried exhibition. She maintains an active studio practice in Midcoast Maine, teaches Jewelry & Metalsmithing at Southern Maine Community College, and works as a freelance designer. 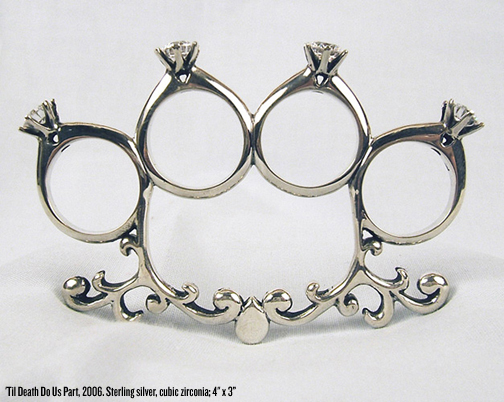 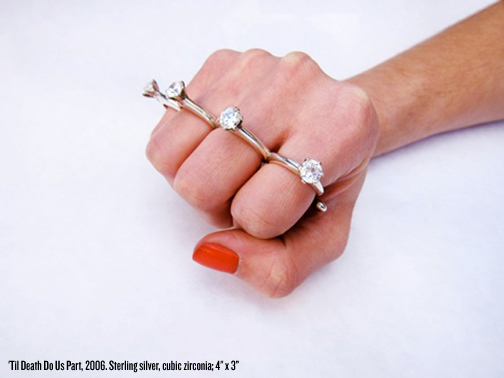