FORBES: How The Rise Of Women Has Turned Men Into Boys

First publised in FORBES (March 3, 2011) by Jenna Goudreau..☛..“Where have all the good men gone?” asks Kay Hymowitz in the new book Manning Up: How the Rise of Women Has Turned Men into Boys. The author and Manhattan Institute fellow, a public policy think tank, offers a new perspective on today’s college-educated young adult. She believes the delay in marriage age and advancement in women’s education and career achievements has turned men in their 20s and early 30s into boys. Immediately after an excerpt (☝) of the book appeared in the Wall Street Journal, waves of Internet backlash chastised Hymowitz’s “child-man” theory as anecdotal and man-hating. We took a quick poll of our 20-something guy friends to gain some male perspective. “Reverse sexism!” cried one. “I’m no Seth Rogen,” said another. Hymowitz agreed to discuss her controversial theory (☝), how she did her research and why she is not engaging in “male bashing” but is actually sympathetic to men who find themselves in a post-feminist world.

FORBES: What is the thesis of your new book, Manning Up?

HYMOWITZ: There is a new stage of life, which I call ‘preadulthood,’ that has been created by changes in the economy and the culture. This new stage has created all sorts of problems between the sexes. In large measure, that is because the women who enter this new stage of life are further along than the men. It is something new in human experience to have women as the first sex.

Why did you decide to write it now?

As I’ve watched my own kids [ages 33, 30 and 23] and their friends grow into this stage, it occurred to me that something is quite different in their experience than mine. I also was becoming aware of a trend in popular culture towards frat-house humor. We take it for granted now, but it actually was something new in the ‘90s. There was this new persona of what I call the ‘child-man’ (☝). It occurred to me that this new period of life and the emergence of this new trend in popular culture were related (☝).

I define [preadults] as college-educated, single (not married), young adults, almost always living in cities. It’s taking a lot longer to grow up because it takes so much longer to get educated for work. More and more people are going to college and graduate school and getting professional training. That is the way to find the most gratifying, best-paying and prestigious jobs. That means you already have a number of years where you don’t want to be tied down. Then you add an extremely complex economy that requires moving from job to job and place to place. It’s awfully hard to do that with a husband and children.

If these young people are not yet adults in your eyes, what is your definition of ‘adult?’

Traditionally adulthood has begun at marriage. Every society needs to ensure that the next generation is being born and raised. Always in the past, that’s what men and women in their twenties were doing. We’ve never had this late an entrance into marriage and this large a group of singles all living in these communities. It is a new demographic.

Why is it necessary to define a new stage of life? Perhaps we need to change the definition of ‘adult.’

A lot of preadult young men are reacting to this new stage of life by embracing the pleasures and the persona of their youth. This is a source of frustration to a lot of women and one of the reasons I wrote the book. If you were going to find him in his most extreme form you could look at the movie Knocked Up. What you hear from a lot of women is guys who are slow to commit, heavily ironic, uncertain about how they should behave or what women want. There’s a funny blog post on The Frisky (☝), a dating website, titled Ask Me Out On A Damn Date (☝). Don’t ask me to ‘hang out.’ Ask me out on a ‘date.’ The culture at large is uncertain about what it wants from its men. We give a lot of mixed messages. We say, on the one hand, that fathers are so important. At the same time, we say that fathers are optional. Many women seem to want men that are confident and have a strong sense of themselves. At the same time, they are put off by too much masculine, authoritativeness. I think a lot of men react to these mixed signals by retreating into themselves, becoming passive and reluctant and often waiting for women to make the first move.

You are receiving a lot of criticism that your evidence is anecdotal. How did you do your research?

There’s quite a bit of literature in sociology on what is generally called ‘emerging adulthood.’ I thought that phrase was vague, so I talked about it as ‘preadulthood.’ I looked at data on college graduation. Women are the majority of college and grad school graduates and are more or less equal when it comes to law school and medical school. There’s new data that shows that young, single, college-educated women are out-earning their male peers. That suggested to me an imbalance. There was also so much complaining by women. There are articles every few months about this more passive, boyish behavior among men. I thought there was enough there to take seriously. Nobody has done research on how many men have Star Wars posters in their apartments. Nobody’s done research on how many men wait for women to ask them out. All I could do was talk to people and read what they were saying. 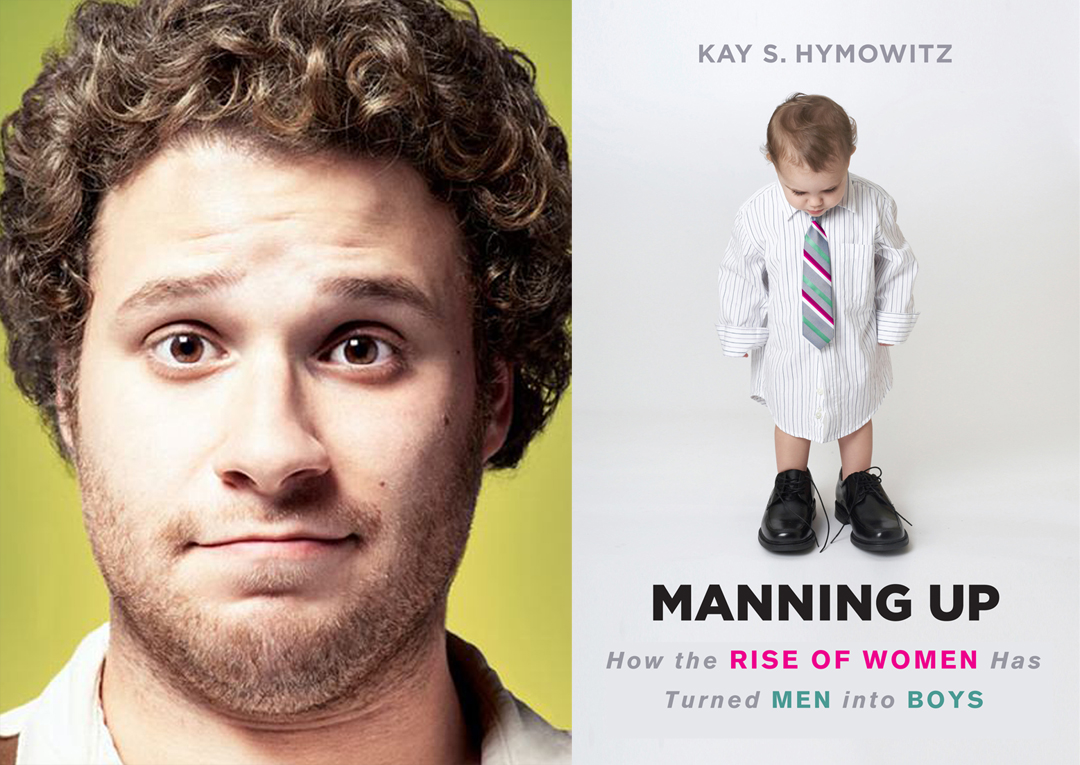 Why is there no mention of a parallel ‘child-woman?’

It’s an interesting point. I can think of one person you could call a child-woman and that’s Sarah Silverman. And you know what? Her show was dropped very quickly. I thought that was significant. I don’t think women take pleasure in seeing themselves as little girls. Men seem to. The question is, why?

If women were once infantilized by dependence on husbands, has the rise of women in the workplace helped them to, as a group, grow up?

I think women have an implicit deadline to building up their careers. They know that decision [to have children] is coming. Men don’t have that deadline. I’ve had men say to me, “I’m a guy; I can wait ‘til I’m 35 or 40.” And it’s true. That means that preadult men and women are on different tracks. That’s a source of stress between the sexes.

Is this preadulthood phase directly linked to women’s advancement in the workforce?

Preadulthood is entwined with the knowledge economy, which is very female friendly. Yes there had to be feminism and the pill for women to get ahead, but you also needed a knowledge economy that was pouring out millions of really interesting and gratifying jobs that women were as good at as men.

As you imply in your subtitle, do you believe the rise of women has created the ‘child-man,’ or have the changes in the economy and culture allowed him to extend his youth?

Both are true. The rise of women has muddied the role of men. The culture says we all love fathers, but at the same time it says we don’t need fathers. In the same way, we’re saying men have to achieve and do well in school, at the same time that we say we don’t need their income. Women’s independence plays a big, big role in male uncertainty. What is their role? Does anyone need them? And what do they need them for? It doesn’t seem to be money.

What reaction are you getting from men?

Oh my god. I think the excerpt in the Wall Street Journal did give the impression that the book engages in more male bashing than it does. I think the book is really sympathetic in many respects to the situation men find themselves in, in a post-feminist world.

How do these changes in the economy and in gender equality affect heterosexual attraction, dating and marriage?

Timing–the biological clock–is a major source of tension. Educated men want to marry educated women and [vice versa], so people are often dating within their own age group. But when women get to be about 28 or 30, they may be at a totally different place than their 28- or 30-year-old guy friends. The other tension I hear is ambivalence about the nice guy. Men complain about this like crazy. I have to think there’s something to it. I do think that we still carry some animal attraction in us to the alpha male. The alpha, in the sense of the strongest domineering man, doesn’t make a very good husband or father in this world but he may still be sexually exciting.

And in this age of equality, what happens to romance?

This is a big reason for some of the anger on both sides. The culture wants a gender-neutral workplace (☝). But when it comes to personal relations, how do we negotiate the gap between our professional lives and our romantic lives?

Do you think young men and women want the traditional, gendered romantic script?

I think they’re confused. I think women almost always expect to be asked out on dates, want it to be paid for–at least on the first—and like gentlemanly gestures. The men who have grown up since the 1980s, in this more gender-neutral environment, are not very good at this or are not certain that women want it—and I suspect a lot of women don’t. It gets very confusing. What do you do? If you open the door for her, is she going to snap at you or smile? That’s the dilemma for men.

If this preadulthood phase is problematic, as you suggest, what are the solutions?

We need to be thinking very hard about early elementary school for boys. There’s something about the ways schools are structured now that’s not working for boys. We do need to see more equal numbers in college-educated young people. We need to be telling our sons and daughters as they’re growing up that career is really important, but family life is also essential to a good life for most people. They should be thinking hard about that in their 20s. I’m not saying get married in your 20s, but be aware that is also a major life goal, for most people, just like achieving your law degree.

For girls, do you think the pendulum swung too far towards career?

I think so. The people who paid the price are the single, 38-year-old women who are pretty, smart, ambitious, talented, high-achieving and can’t find guys.

Were boys left behind in the process?

I think it was a cultural message in the ‘80s and into the ‘90s that girls were really special, and we wanted to see them achieve. You took your daughters to work. What were boys supposed to be doing? I dunno. I think there is resentment out there. Wouldn’t you be resentful?

READ AN EXCERPT FROM Child-Man In The Promised Land (☝)