America’s Dams Ready To Burst, In Need Of Immediate Repairs

First publised in The New York Times (February 21, 2011) by Kevin Jagernauth..☛..Frank Brassell, owner of Nelda’s Diner in this town wedged between the slopes of the southern Sierra Nevada, knows his fate should Lake Isabella Dam, a mile up the road, suddenly fail when the lake is full. “I work here,” Mr. Brassell said, looking around the brightly lighted diner. “And I live right over there,” he added, pointing across the town’s main street. “The water would all come down here and it would try to take a right turn and go under the freeway, and it wouldn’t all go,” he said. “So I’m dead.”

Lake Isabella Dam is just one acute example of a widespread problem: Of the nation’s 85,000 dams, more than 4,400 are considered susceptible to failure, according to the Association of State Dam Safety Officials. But repairing all those dams would cost billions of dollars, and it is far from clear who would provide all the money in a recessionary era. The stakes are particularly high not just for Mr. Brassell and the other 4,000 residents of Lake Isabella, but for the 340,000 people who live in Bakersfield, 40 miles down the Kern River Canyon on the edge of California’s vast agricultural heartland. The Army Corps of Engineers, which built and operates the 57-year-old dam, learned several years ago that it had three serious problems: it was in danger of eroding internally; water could flow over its top in the most extreme flood season; and a fault underneath it was not inactive after all but could produce a strong earthquake. In a worst case, a catastrophic failure could send as much as 180 billion gallons of water — along with mud, boulders, trees and other debris, including, presumably, the ruins of Nelda’s Diner — churning down the canyon and into Bakersfield. The floodwaters would turn the downtown and residential neighborhoods into a lake up to 30 feet deep and spread to industrial and agricultural areas.

The potential is for a 21st-century version of the Johnstown Flood, a calamitous dam failure that killed more than 2,200 people in western Pennsylvania in 1889. But corps and local government officials say that the odds of such a disaster are extremely small, and that they have taken interim steps to reduce the risk, like preparing evacuation plans and limiting how much water can be stored behind the dam to less than two-thirds of the maximum. Still, they acknowledge that the impact of a dam failure would be enormous. “It’s not just the loss of life, potentially,” said David C. Serafini, lead technical expert for the corps on the project. “It’s the economic damages and the environmental damage, too.” Corps engineers are preparing to propose fixes later this year. But at best, repairs would not begin until 2014 and could cost $500 million or more, money that would have to be approved by Congress.

Nationwide, the potential repair costs are staggering. A 2009 report by the state dam safety officials’ group put the cost of fixing the most critical dams — where failure could cause loss of life — at $16 billion over 12 years, with the total cost of rehabilitating all dams at $51 billion. But those figures do not include Lake Isabella and other dams among the approximately 3,000 that are owned by the federal government. The corps, for example, says that more than 300 of the roughly 700 dams it is responsible for need safety-related repairs, and estimates the total fix-up bill at about $20 billion. The corps has already spent about $24 million just to determine the scope of the problems at Lake Isabella, and with the New Orleans levee failures during Hurricane Katrina a lingering memory, Congress has appropriated money for other federal dam repair projects as well. But about two-thirds of all dams are private, and financially struggling state and local governments own most of the remainder. It is difficult to predict how needed repairs to these dams will be financed; legislation to provide federal money to help has languished in Congress. What’s more, the number of high-risk dams keeps rising as structures age, downstream development increases and more accurate information is obtained about watersheds and earthquake hazards.

Among the corps’s dams, Lake Isabella is one of 12 that are ranked in the highest category, as a dam with serious problems and serious failure consequences, given the large downstream population. “The classification is it’s an unsafe dam,” said Eric C. Halpin, the corps’s special assistant for dam and levee safety. But Mr. Halpin noted that 319 of the corps’s dams were considered “actionable from a safety standpoint.” Lake Isabella would be one of the more expensive projects, but then again, its problems are legion. It is actually two earthen dams, a main one that is 185 feet high and an auxiliary one that sits on higher ground and is 100 feet high. With a rock ridge between them, they stretch for about a mile across the Kern River Valley. For six decades the dams have controlled flooding on the Kern, helping Bakersfield to grow and thrive. And the lake that formed behind the dam has become the main driver of the economy of Lake Isabella and other towns, bringing fishers, boaters and whitewater rafters to the area. But there have always been people in the area who felt the dams were flawed. 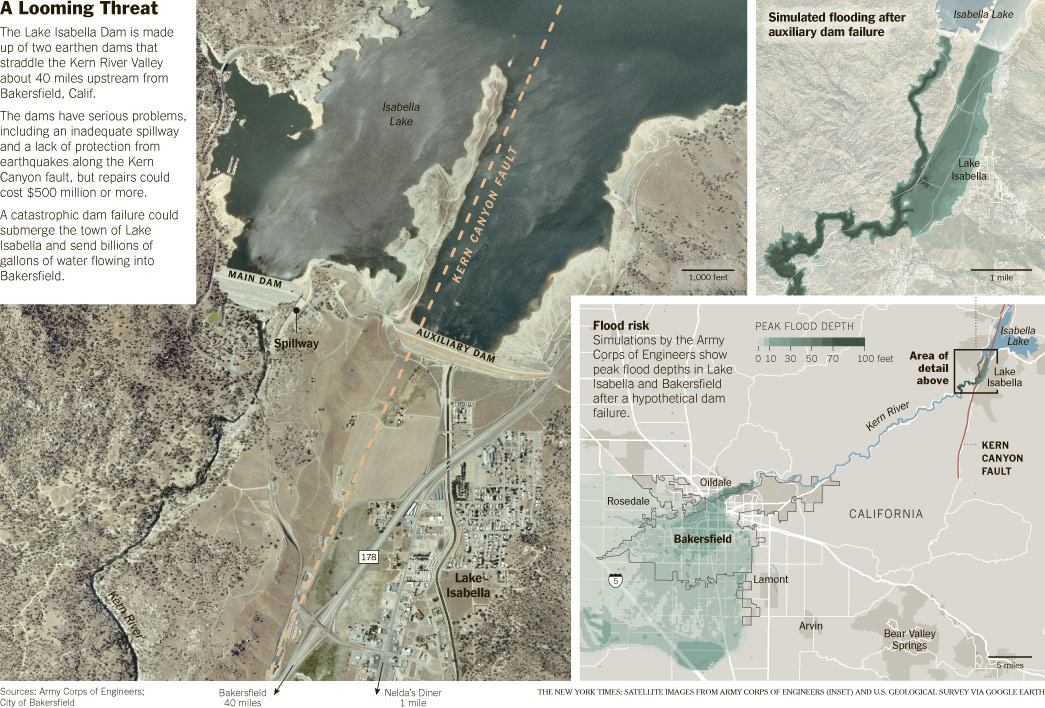 David Laughing Horse Robinson, an artist and teacher who lives in the lakeside town of Kernville, said his grandfather, who worked on the dam, and others used to talk about it. “Constantly,” he said. “How it was the stupidest thing they ever did. It’s doomed.” Water seeps through the Lake Isabella dams, as it does through most earthen dams, which account for a vast majority of dams in the United States. But the seepage at Lake Isabella was especially severe — it is what prompted the corps to perform a full-scale study of the dam. Water seeping through a dam can erode it from the inside out, to the point where the dam may fail. Engineers have learned to build structures into dams like drains and filters, to stop erosion and allow infiltrating water to drain safely away. But the Lake Isabella dams were constructed before such features became commonplace. “It was built with the best available knowledge and technology at the time,” said Veronica V. Petrovsky, who is managing the project for the corps.

That knowledge, or lack of it, extended to the understanding of the large and complex watershed, which includes the slopes of Mount Whitney, the tallest peak in the contiguous United States. To determine how big the spillway needs to be, it is critical to know how much water might be impounded behind the dam each year. Calculations show that in an extreme year with a “probable maximum flood,” the spillway would be far too small. “We could not release the water fast enough,” Ms. Petrovsky said. “It would overtop.” An overtopped dam can fail quickly as the water erodes the downstream side. Concerns about seepage, in particular, prompted the corps to restrict the lake level, because less water creates less hydrostatic pressure that would force water through the dam. Earlier this winter, the lake was so low that water did not even lap up against the auxiliary dam. But the corps has been monitoring the heavy rains and snowfall that California has experienced this winter and says that in the spring and summer it may be necessary to divert water through the spillway to maintain the safer lake level. Overtopping, however, presents only a “small concern,” the corps said.

With both seepage and overtopping there would be plenty of warning that the dam was in jeopardy, allowing Lake Isabella and Bakersfield residents to evacuate. An earthquake would be a more immediate disaster, although Bakersfield would still have about seven hours before a wall of water made its way down the canyon, according to the corps. The auxiliary dam was built, knowingly, on the Kern Canyon fault, one of many in the region. At the time the corps brought in seismologists and geologists who concluded that the fault was not active. Only recently have scientists been able to accurately detect and measure ancient earthquakes, a field known as paleoseismology. Mr. Serafini and others determined that there have been three significant earthquakes on the fault in the past 10,000 years. “We have got a fairly active fault on our hands,” Mr. Serafini said. The last quake occurred about 3,400 years ago, he added. It’s possible to construct a safe earthen dam on an active earthquake fault, by using the proper materials to minimize settlement or slumping when shaken, and including drains and filters to help stop the inevitable cracks from growing through erosion. Not only do the Lake Isabella dams lack those features, but the auxiliary dam was built on sediments that could turn into a virtual liquid in a quake, leading to even greater damage.

While Mr. Serafini and his team are still working on proposals, the likeliest solutions include blasting a much bigger spillway out of bedrock adjacent to the main dam and using the excavated rock to build a buttress — essentially an entirely new dam — downstream from the auxiliary dam. The old dam could still move in an earthquake, Mr. Serafini said, but the buttress would have the necessary drains and filters to prevent failure. While the proposals are being fleshed out, the corps team has been holding meetings in the area to let people know what the possibilities are. “We don’t hear much from the people of Bakersfield,” Ms. Petrovsky said. “It’s one of those ‘out of sight, out of mind’ things. You forget there’s a dam up here holding back a lot of water.” Not so in Lake Isabella, however, where the dam, and its potential for failure, are harder to ignore. “I think we’ve all put some thought into it,” said Mr. Brassell, the diner owner. “But anytime you have a diverse group of people there are going to be those who are panicked at some level, and those who are calm. Faith in God, you know. He’s going to do what he wants.”