First publised in PSFK (February 22, 2011) by Dory Carr-Harris..☛..For those of you who don’t know, the Penrose Triangle is one of those “impossible objects”: a two-dimensional figure that the eye automatically interprets as three-dimensional (like M.C. Escher’s stairs), in other words, an optical illusion. Therefore, it is not surprising that this object was one that enthusiasts were eager to try to 3D print.

Deemed hopeless, the blogosphere was abuzz when a few days ago, Netherlands-based designer Ulrich Schwanitz claimed to have succeeded in printing the object, but wouldn’t reveal his method. The challenge was on to figure it out, and 3D modeller Artur Tchoukanov was the first to crack the code. He posted his solution and schematic and was therefore “wrongly” credited by BoingBoing’s Cory Doctorow as the initial creator of the object. This sparked an Internet squabble that was eventually resolved, but unintentionally raised some interesting questions about the definition and source of invention, further debated on i.Materialise. Questions like: what defines invention? Intellectual Property law rules on the side of the “documented inventor” therefore, Artur would be the victor of this battle, yet it is clear, in this case, that Ulrich was the 3D object’s original creator.

Ulrich was first, of this there can be no doubt. But, he did not disclose his solution. Artur did. If we make a parallel to Intellectual Property law and Ulrich claimed to have invented something but Artur disclosed it in a patent application, then Artur would be the inventor. Even if Ulrich could claim that there was prior art. This might lead to Artur not getting a patent but it would not lead to Ulrich getting it. Ulrich decided to keep his invention a trade secret. The risk you run when you do this is that someone else could, in the meantime, invent your trade secret. IP law is on the side of the “documented” inventor not per se the person who came up with something first. So while the honor of making the 3D printed Penrose triangle should clearly go to Ulrich. It might be that Artur invented it. What is invention? Is it the explanation of something? The sharing of knowledge? A documented first? Should the person that puts something online be credited?  And in the case of the Penrose triangle that dates back several hundred years how can we possibly troll through all the information to determine what exactly is prior art? Who invented this triangle? Well actually it might be Oscar Reutersvärd in 1934. This would mean that neither Artur nor Ulrich is the inventor.

The Penrose triangle story is an important one. If we all have access to the same information and if this information spreads near instantly across the globe this kind of thing will happen much more often. In this case all the parties were blameless. Artur never wanted to usurp Ulrich’s invention, he simply wanted to solve an interesting topology problem in his spare time. It was fun. But, the implications for innovation, design and manufacturing are enormous. 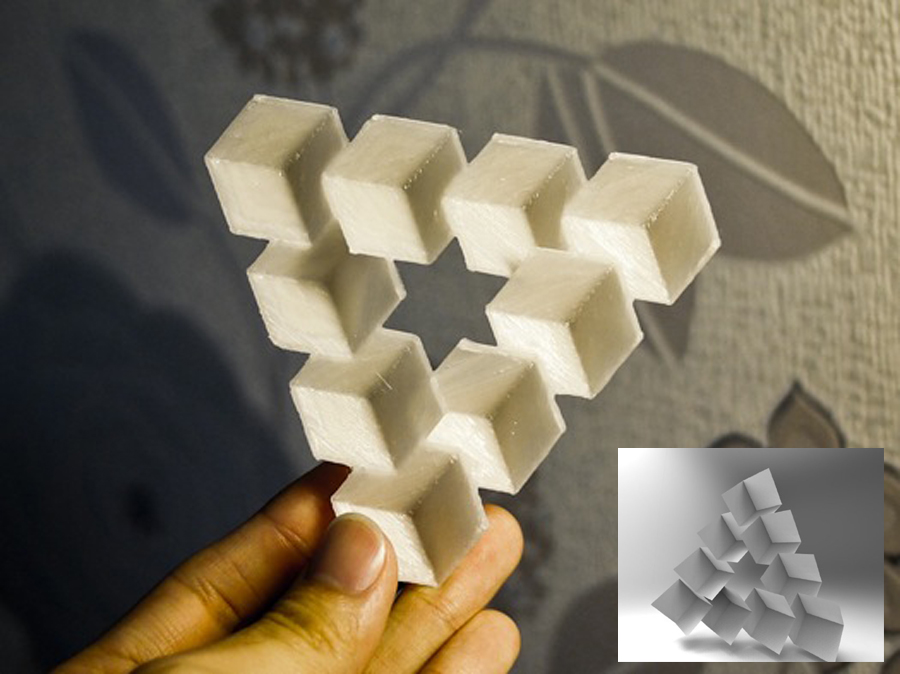