The New Zealand city of Christchurch felt the full brunt of a 6.3-magnitude earthquake today, just five months after experiencing a 7.1-magnitude quake. Based on the magnitude, Gary Gibson, a seismologist at the University of Melbourne, Australia, says ground shaking would have been “severe” in the city centre, which was only 10m from the earthquake’s epicentre. Details of the damage remain vague, but 65 deaths have been confirmed and there are widespread reports of severe building damage. Two buses were crushed by collapsing buildings, and 75% of the city was left without power. According to Gibson, the active fault area was approximately 15 square kilometres.

“One side of the fault moved about 1 metre relative to the other,” he says.

Last year’s 7.1-magnitude earthquake was more than 10 times as strong as today’s but caused no deaths, probably because it occurred at greater depth and further away from Christchurch: its epicentre was 70km west of the city. And the focus of September’s quake was some 10km below ground – today’s was half as deep. “The ground motion [of the previous quake] had significantly attenuated by the time it reached Christchurch,” says Adam Pascale, a seismologist at Environmental Systems & Services in Richmond, Australia. Seismologists suggest today’s quake occurred along the same fault line as last year’s – some even consider it a large aftershock from last September’s event.

The question now is: are more quakes likely? That all depends on whether the underlying rocks have settled into a position where they can absorb the stress from tectonic plate movements again. Gibson suspects this has already happened. “An earthquake of this magnitude does a good job of releasing that stress,” he says. Although it is possible that other fault lines in the region might burst, “it’s unlikely”. New Zealand sits on the tectonic boundary between the Pacific plate and the Australia-India plate. Christchurch is not on that frontier, but it is near to related secondary faults such as the Alpine fault, which runs along the spine of the South Island.

Technology is coming to the aid of those affected by last night’s earthquake in Christchurch. Within hours of the devastating 6.3-magnitude quake, Google’s “Emergency Response Team” had set up a simple web tool to help people request and post information about missing friends and relatives. The person finder (as shown in the image below) already has 4300 records of both missing people and those who are letting their terrified relatives know that they’re safe.  CLICK HERE TO USE THE GOOGLE EMERGENCY PERSON FINDER IN THE CHRISTCHURCH AREA. 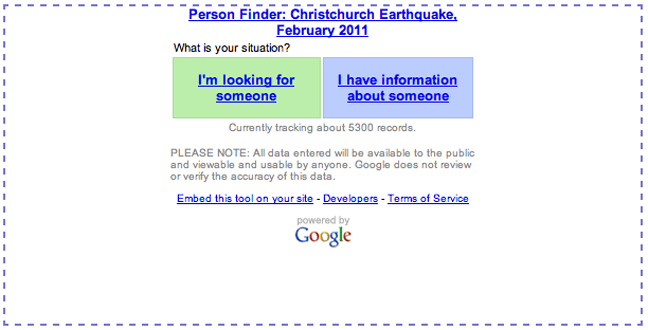 Another website that came online within hours of the earthquake lets people in Christchurch tell emergency services what the situation is like on the ground.Set up by New Zealand’s Earthquake Commission, the simple website lets users tweet to #christchurch, or #eqnz or #ChristchurchQuake to give information about people who are trapped or where damaged buildings and even payphones are located. The site also lists reports as they come in from residents including live pictures and where working ATMs can still be found. Users can log where they are on the map, in and around Christchurch, and the website sends an alert if any report comes in within 20km of their location. 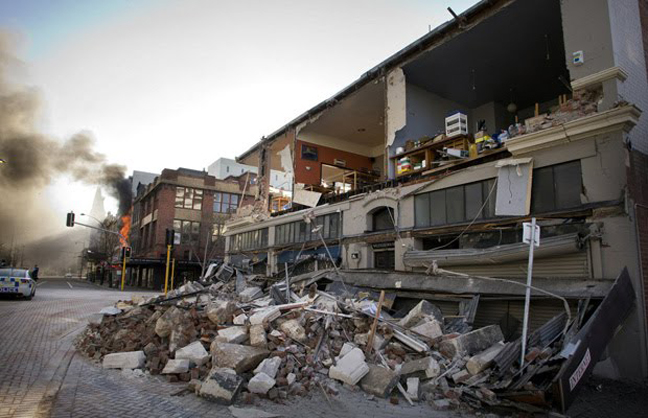