I have yet to see Never Let Me Go, but from everything I’ve heard it’s absolutely extraordinary; a brilliantly-crafted film that is an exceptional example of how to do everything right when converting a novel to a a motion picture.  Reading the article below I was reminded of a fascinating story my friend Meinert recently told me that took place during the beginning of production of Never Let Me Go.  He explained how when the director, Mark Romanek, was casting the roles of the child versions of the older characters he wanted to create an extra layer of believability by casting children who resembled as much as humanly possible their more senior counterparts.  Romanek says he can’t stand watching a film where the casting of a younger ‘version’ isn’t handled with care, and I couldn’t agree more.  He also went to great effort to line-up the mannerisms and idiosyncracies of the ‘olders’ and the ‘youngers’ by videotaping the older actors acting out the roles of their younger versions; thereby giving the children a ready-made framework to build their characters on.  This and many other details about the careful transition of Kazuo Ishiguro’s award-winning novel from the page to the screen is most certainly one reason why Ishiguro seems to enjoy cinematic interpretations of his books.  His advice to fellow authors who get their backs up over film versions of their respective written works appears to be this: “Get over yourselves.”  Here’s an article from Intelligent Life where Ishiguro explains his outlook:

Film adaptations of books are common, but few are very good. Some literary purists and strong-minded authors abhor them, but Kazuo Ishiguro takes a different view. He is perplexed by writers who are precious over their novels. He knows his original work will remain untouched, and rather likes the thought of his ideas being adapted and reaching further into the cultural landscape. Mr Ishiguro was speaking at a recent screening of “Never Let Me Go”, the second of his six novels to be dramatised on screen. (The first was “The Remains Of The Day”, the novel for which he won the Man Booker prize in 1989.) Although recognised as a novelist, Mr Ishiguro has also written screenplays, so he is more tolerant of the work that goes into squeezing a lengthy book into a 100-minute film. “I try to write un-filmable novels!” he said with a smile. He then explained that novels and films serve different purposes. With a novel he can get inside someone’s head and leave room for readers to use their imagination. But a film inevitably provides a fuller picture. In the book “Never Let Me Go” (reviewed by The Economist), the sound of a song is left open to interpretation, whereas in the film a particular song had to be chosen (a swooning jazz number by Jane Monheit). But Mr Ishiguro said he trusted Mark Romanek, the director, to remain true to the book’s themes. The story follows three friends at an English boarding school. The charming atmosphere belies a horrendous truth: these youths are in fact clones, bred for their organs and doomed to brief lives. These friends of uncertain destinies are also caught in a love triangle, allowing Mr Ishiguro to explore his signature themes of love and loss, duty and sacrifice, and memories. The film is expertly cast, with Carey Mulligan as Kathy (for which she recently won Best Actress at the British Independent Film Awards), Keira Knightley as Ruth in her least wooden performance yet, and Andrew Garfield as the sensitive Tommy. Mr Ishiguro claims to have learnt more about his characters from the nuanced interpretations of these actors, who gave shape to what he invented on paper. Ms Mulligan in particular conveys Kathy’s unwavering stoicism with startlingly calm conviction. Some audiences, particularly in America, have questioned why the three don’t attempt to escape from their bleak situation. Mr Ishiguro’s answer is that the story is about nobility. People do not rebel in real life, he said. Rather, they resign themselves to their fate, and so release feelings of hatred and unhappiness. Such notions are rare in Hollywood, and this film is more powerful for it. 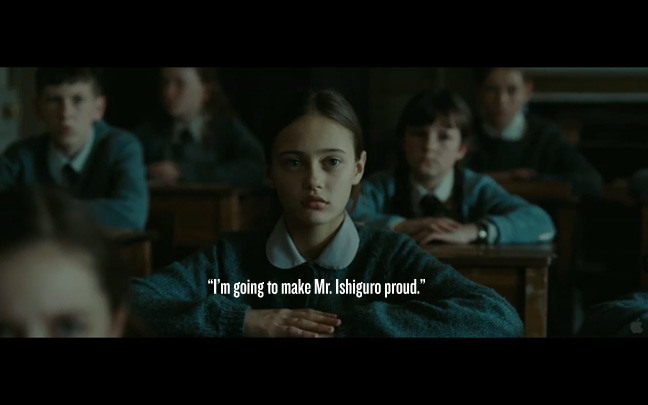