First published in SMART News on January 12, 2011..☛..An Invisibility Cloak developed by researchers at the Singapore-MIT Alliance for Research and Technology (SMART Centre) is voted 4th in Physics World’s Top 10 breakthroughs of 2010 (learn more about that HERE).  A competing research team in the United Kingdom is also cited by Physics World for a very similar approarch, developed independently but published three days later than the Singapore team.

Optical cloaking, the ability to make objects invisible from any angle and at any colour, has captured human imagination for many centuries, from Athena’s cap to Harry Potter’s invisibility cloak.  Invisibility cloaks have attracted wide interest recently because of their possible realisation. The biggest challenge to true invisibility is known to be the cloaking of a macroscopic object in the broad range of wavelengths visible to the human eye. George Barbastathis and his team at the SMART Centre, Baile Zhang, Yuan Luo and Xiaogang Liu, solved the problem by incorporating the principle of transformation optics into a conventional optical lens fabrication with low-cost materials and simple manufacturing techniques.

They created a transparent cloak by gluing together two pieces of calcite with differing optical paths. The cloak has a small wedge measuring 38mm x 10mm x 2mm and is placed over an intended object.  Capitalising on optical anisotropy, a special property that is particularly pronounced in calcite, to bend the light rays as they enter the cloak, the team was able to render objects under the wedge invisible when the viewer attempts to see from left and right sides of the wedge.  The technical details of the team’s approach was published in Physical Review Letters on January 18, 2011.  In addition, the American Physical Society (APS) selected and highlighted the paper in the Synopses section of the Physics website.

“We deform the space around a wedge-shaped cloak region by refraction in two prism-shaped pieces of calcite adhered side-by-side, with their optic axes oriented carefully.  An observer looking from the side perceives the wedged shape as flat,” explained George Barbastathis, a Principal Investigator at SMART Centre and Professor of Mechanical Engineering at MIT. 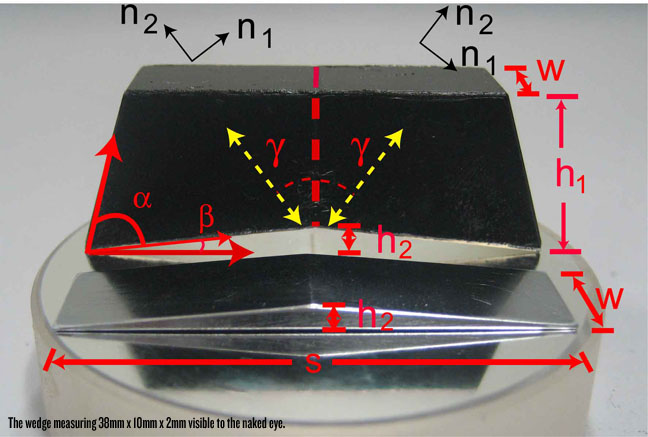 Calcite is a cheap and abundant mineral made of calcium carbonate.  It is most commonly found as stalacite and stalagmite in limestone caves.  The cloak is able to conceal a macroscopic object with a maximum height of 2mm, larger than 3500 free-space wavelenghts, inside a transparent liquid environment.  Its working colour range encompassing red, green and blue light has also been demonstrated. Previous cloaking attempts required expensive and complex setups and can only be viewed under the microscope.  By using a natural calcite crystal, George and his team were able to create a cloak that costs less than US$1000, which is cheap by research standards.  Their experiment is also visible by the naked eye. 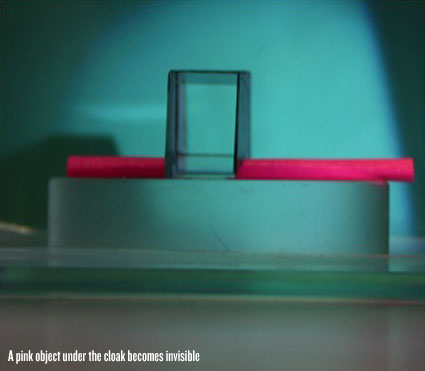 Though the cloak is still limited to two-dimensions (it is visible from the other sides of the wedge), it scales favourably to larger objects, as long as a large enough piece of calcite can be obtained. “We are delighted that the physics community has noticed our efforts and voted our research into the top 10 list of breakthroughs of 2010,” said Baile Zhang, Postdoctoral Associate at SMART Centre. “A fully functional invisibility cloak can have important applications especially in areas of defense and security.  The cloak can also be used to hide cables on the seabed or help biologists in marine research where fish or other ocean creatures are not disturbed,” Baile added.