Orchestrate Your Own Large-Scale Lightshow With DJ Light™

Created by Dominic Harris and Cinimod Studio, DJ Light™ is an immersive public sound and light installation that gives visitors the power to orchestrate performance of light and sound across a large public space.  It was created for energy company Endesa as the cornerstone of their Christmas celebrations in Lima, Peru. The installation allows one person to take control over a massive space and manipulate the incredible array of light and sound by using just their body. The installation consists of 85 giant globes of light, each capable of displaying millions of colours.  As the “guest DJ” assumes their position on the podium, they can use their arms to point and gesture.   These movements are translated in real-time into beautiful movements of light and generative sound across the space.

HARDWARE: Each of the inflatable globes were designed and fabricated bespoke for the project. They each contain a DMX controlled 4-sided custom LED lighting strip which is suspended within the globe and fabricated from aluminium profiles for minimal weight and maximum thermal performance. Each lighting strip is individually controllable and energy efficient (typically globes of these sizes are illuminated by a 500 watt single-colour light source, where as Cinimod have achieved the same brightness in full RGB at a fraction of the power consumption. Each globe has a unique identity that allows the colour to be controlled from the main DJ podium. Suspended above the podium is a high accuracy thermal tracking camera that has been developed for Cinimod to allow for live tracking of the “guest DJ”. By tracking every movement of the person below, this camera communicates control signals to the main software program that is responsible for the live sound and light generation. The audio component to the installation is as important as the visual illumination, and is comprised of 8 channels of sound output to a matching number of powerful outdoor speakers. The sound is output via a MOTU 12 channel firewire device connected to the central windows-based controlled system.

SOFTWARE: The core interactive system is programmed with MAX/MSP running on a windows 7 computer. The software was created as a series of inter-connected modules which can be categorised as:

1) Thermal Camera feed interpreter: establishing hot and cold zones of movement, and vectors of movement
2) Interaction Module: taking live feed of body movement interpreter and processing into a series of behaviours, moods and scene settings
3) Generative Sound Module: a highly complex series of audio systems that generate a real-time 8 channel sound track to the installation. User interaction controls not only the type of sounds heard but also their positions within the space.
4) Globe Lighting Mapper: generations of the colour behaviours for each globe, sent by standard DMX (via multiple splitters) to the large array of globes. The lighting control is itself generative, taking not only the direct movement of the ‘dj’ but also accepting recursive feeds from the audio and animation subsystems.

Dominic Harris is an interactive artist whose chosen palette of materials is lighting, interaction design, and electronics. Dominic designs and fabricates his artworks at  Cinimod Studio,  a multi-disciplinary  practice he founded in 2007.  This studio is comprised of a dedicated team with diverse backgrounds including architecture, product design, electronics, programming, graphic design, and workshop skills.

You can learn more by clicking here: cinimodstudio.com 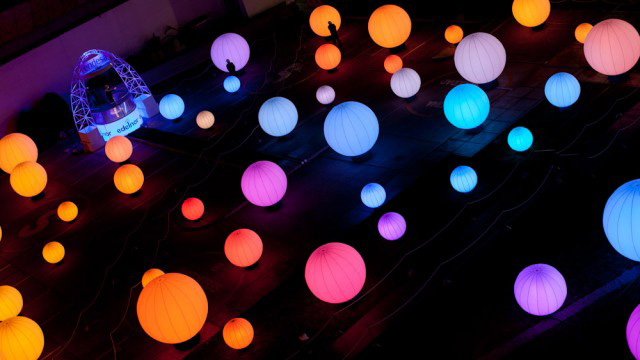 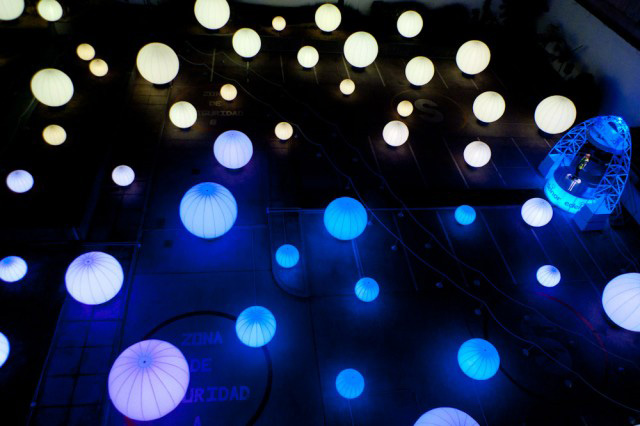 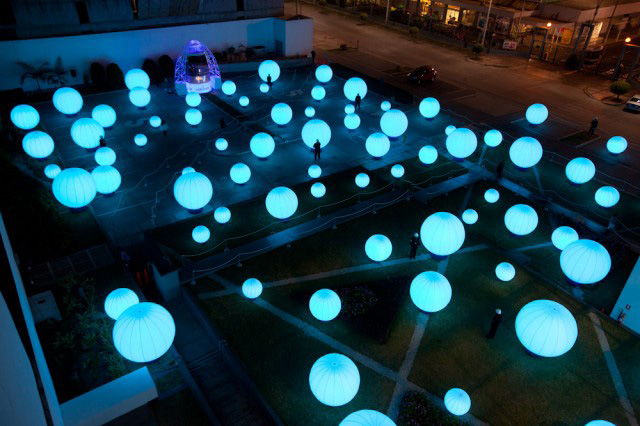 Previous post:
FORBES Takes A Look At The Bachelor Pad That Ashton Kutcher Just Put On The Market Next Post:
The “Robo Rainbow” Vandalizing Graffiti Machine On A Bike