From The Daily Beast (published February 2, 2011)..☛..Barbara Walters has always seemed rather indestructible. From her trailblazing days at the Today show and ABC’s evening newscast to her celebrity specials and reincarnation as doyenne of The View, the 81-year-old journalist has made few concessions to age. But last spring, after feeling pressure in her chest while climbing a staircase in Central Park, Walters found herself in a doctor’s office, hearing that her chances of being alive in two years were 50-50—unless she had open-heart surgery. You know the outcome: Walters had the operation and was back with Whoopi and the gang four months later. (Actually, she stopped by 10 weeks later because she didn’t want to miss a sitdown with President Obama.) And the ordeal of having a heart valve replaced caused her to bond with other famous patients who have had heart surgery, including:

They all appear Friday night in a surprisingly moving ABC special in which Walters and these bold-faced names describe their experiences in starkly personal terms. Williams calls them “the brotherhood of the cracked chest. What was difficult,” Walters told me, “was deciding how personal I had to let it be. Even on The View, I don’t talk about my personal life.” But she decided to show a less-than-flattering photo of her in the hospital, and one that a paparazzo took when she emerged from her Manhattan apartment, looking quite frail, nearly two weeks after the surgery.

The hard work began after Walters had her aortic valve replaced with one from a cow. “You feel enormous fatigue,” Walters says. “I could barely walk from my bedroom to my bathroom. I had pain where my scar is, but not excruciating pain. The worst of it is fatigue. You’re up at 3 in the morning because you’ve been sleeping all afternoon.” She stuffed herself with chocolate cake, hot dogs, and bologna sandwiches to gain back some of her lost weight. It is true, as Walters points out, that only 2 percent of patients die from heart-valve replacement surgery. But anyone who’s had a family member go through the operation, as I have, knows how daunting those odds can seem—and how difficult the recuperation can be. Maybe that’s why Walters redid her will before being wheeled into the operating room. For the details she never knew—or has forgotten—she interviewed the surgeon who conducted the operation. Walters had a busy schedule of awards dinners and a White House event last May, she said during our conversation, and asked the doctor if she could put off the procedure until June. What would be the downside? “You have a small chance of dropping dead,” he replied. She quickly scheduled the operation, telling no one except her daughter and two television executives until the morning she went in.

Among the guests, Letterman is the most riveting, undoubtedly because he grants so few interviews and ordinarily keeps his emotions well hidden. That is not the case when he talks about having quintuple-bypass surgery at 53 and recalling that his father died at 57. “You’re weak as a bunny. You’ve been hit by a train,” the comedian says. Letterman says he “dabbled in depression” during an emotional roller-coaster: “I would find myself bursting into tears and sobbing uncontrollably, with joy.” Walters says Letterman had the same motivation as she did: “We are grateful we’re alive and we want people to know what it’s like. He was not coming on to plug his show.” Clinton, who used the same surgeon as Walters, recalls that the physician stopped his heart for 73 minutes, standard procedure during the surgery. “That is kinda scary,” he said. “You’re basically being kept alive by a machine.” The former president also strikes a spiritual note, saying that at one point he saw a “circle of light” and the images of Hillary, Chelsea, and other “people I love.” Rose had the most arduous journey, since his symptoms came while he was in Syria interviewing President Bashar al-Assad. He flew to Paris for a 14-hour operation—the first procedure failed and doctors took out the valve—followed by a seven-day induced coma. Even then, Rose recalls the doctor saying “it’s too early to tell… whether I’m going to live or die.”

The program manages to avoid the maudlin, in part because these patients are trained entertainers. (Regis says his wife was told “they’re going to put him on a gurney, roll him into the OR room and bust him open like a lobster!”) There’s a touch of cheesiness (dramatic music, slow-motion shots, gauzy reenactment) but the emotional spine is the frankness of the interviews. And given the collective star power, the program will probably persuade some folks to seek treatment before it’s too late. “This is the most important special I’ve ever done,” Walters says, adding that few realize that heart disease is a far more deadly killer for women than cancer. Given her advanced age and storied career, wouldn’t the aftermath of the surgery have been a good time to gracefully bow out? After all, she’s husbanding her strength these days, passing up cocktail parties and other events where she no longer feels obliged to make an appearance. “I felt I had to come back,” Walters told me. “If I didn’t, people would think, ‘She didn’t come back because she’s ill.’ They’d look at me with pity and say, ‘How are you?'” But she is toiling away, having taped three other television specials this past year before tackling this most personal of programs. 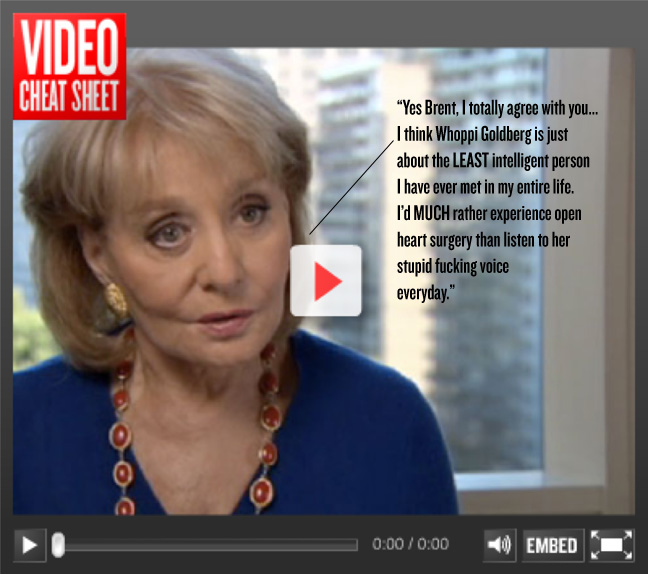 Previous post:
If Brain Scans Can Distinguish Between Truth And Falsehood Can They Be Used As Evidence In Court? Next Post:
Mass Tree Deaths Prompt Scientists’ Fears Of Catastrophic Climatic Tipping Point For Amazon Forest Very Soon