Making a paper plane that flies for more than a few metres is hard enough. But now for the first time, a hundred paper planes have embarked on a journey back to Earth from the edge of space. To be fair, the stunt (which is part of an advertising campaign by Samsung) does rely on help from a helium-filled weather balloon and the pull of gravity. Nonetheless, as advertising stunts go, it’s not a bad one – and it makes for some pretty incredible video footage (see below). To get the best paper plane design, the team consulted Andy Chipling from the Paper Aircraft Association, and for the balloon design they talked to Robert Harrison of the Icarus project, which sends balloons to high altitudes. The result was a weather balloon filled with helium which carried the paper plane payload into the sky. The idea behind the stunt was to prove how durable Samsung memory cards are, so each plane contained a card with a message for whoever might find it back on Earth. Just who the lucky recipients will be, and when the planes will be found, remains to be seen. As one of the engineers, Joel Veitch, blogged at the start of the project:

I expect some will end up in the Siberian permafrost, where they will remain until they thaw out thousands of years from now to be discovered by whatever post-human civilisation exists on Earth by then. They will plug the SD card in to their post-human future SD card reader and hear our voices from the deep past, and a bond will be formed across the vastness of time thanks to our amazing space paper plane exploit!

Until then, however, look out for any planes that might have fallen near you. If you find one, let them know, at: http://projectspaceplanes.com/ask. 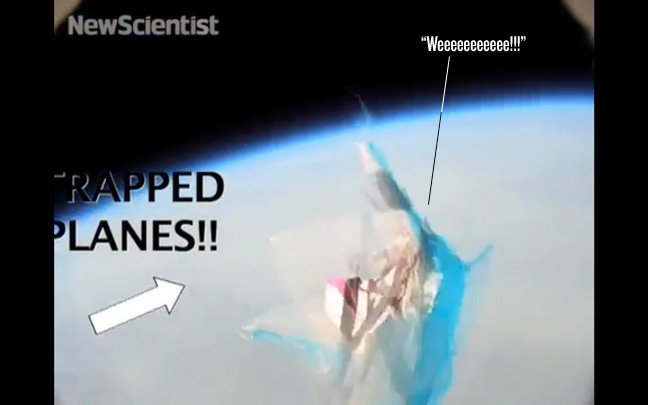