With A Net Worth Of $350M, Keanu Reeves Is Still Known In The Industry As “The Greatest Guy On Earth”

FROM The Guardian (January 13, 2011): Keanu Reeves is not the greatest film actor in the world, nor is he anywhere close to the worst, but he has some claim to be the most enigmatic, as well as the most warmly adored. That much became indisputably clear last May when the “Sad Keanu” phenomenon erupted online. Reeves had long been cherished, and occasionally mocked, for his work in pictures as diverse as the Matrix trilogy and My Own Private Idaho, Speed and the Bill & Ted films. But it took an unexceptional paparazzi snap of the actor sitting on a park bench, staring disconsolately past the half-eaten sandwich in his hand, to ignite widespread concerns for his welfare and to act as the catalyst for the sort of celebrity deification that only usually comes with death.

Outnumbering the hundreds of Photoshopped versions of the image that began circulating – Sad Keanu perched alongside Forrest Gump, or gazing at a miniature Sad Keanu on the ground, who in turn was peering at an even tinier Sad Keanu – were messages of support, and testimonies from those who had met Reeves, or simply been inspired by him. Fans pointed out the setbacks and traumas that had dogged the Beirut-born, Toronto-raised actor, from his father deserting him and his mother when Reeves was three through to his sister’s leukaemia and the death of his former girlfriend in 2001, two years after she gave birth to their stillborn daughter. What started as light-hearted internet wildfire quickly acquired a serious, even spiritual dimension. Internet forums were littered with stories of Reeves’s generosity and altruism: how he had spent $5m on treatment for his sister, bought Harley-Davidson motorcycles for the special effects team on The Matrix Reloaded, given $20,000 to a hard-up set-builder, and frequently bought breakfast and lunch for minor crew members. June 15 was designated Keanu Day by Sad Keanu enthusiasts, and only a total louse would complain that he didn’t merit the honor.

There really hadn’t been any precedent for such a particularised display of devotion, but then where are the precursors to Reeves himself? There have been other dopey buffoons capable of bringing humorous gradations to the word “Woah!”; other action heroes who could cling to the underside of a speeding bus or strike mid-air kung-fu poses; other indie heartthrobs who could simper sensitively through curtains of hair. No one, though, had previously combined these incompatible elements, or exuded such humility and sincerity in the process. Factor in Reeves’s discretion and lack of acclaim – despite being linked to everyone from Parker Posey and Winona Ryder to Diane Keaton and Trinny Woodall, he is as much of a stranger to the gossip columns as he is to the awards season roll-call – and you have an A-list star who has inspired curiosity and protectiveness in equal measure. 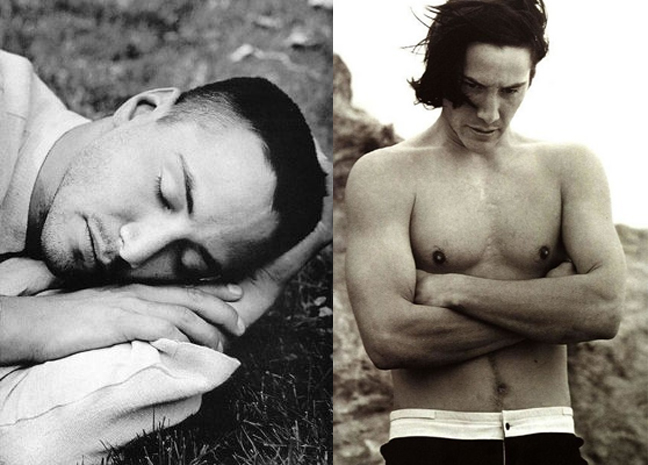 When I meet Reeves in a London hotel, there’s an air of sobriety about him. He’s formal and well-mannered, refusing to sit down before I do. He’s dressed in black, apart from grey desert boots and a rainbow-coloured friendship bracelet. His hair is still long and centre-parted; a beard clings in inky clumps to his thin face. But this is no Sad Keanu. The 46-year-old may be hopeless at concealing the discomfort he feels at talking about himself, but whenever the conversation wanders off-piste he becomes larky and liberated.

Reeves is a snug fit as Henry in his latest film Henry’s Crime. His knack for playing the blank page, the human blur, has been mistaken in the past for stupidity or vacancy. Not at all. What he has is a singular Zen-like serenity, a stillness and poise, which can be just as hypnotic amidst the kinetic fury of Speed and The Matrix as it is in the more contemplative dreamscapes of Little Buddha or A Scanner Darkly. The misconception is partly Reeves’s own fault. Interviewed in the early 1990s, he played up the stoner-slacker image cultivated in early films such as River’s Edge, Bill & Ted’s Excellent Adventure, Parenthood and I Love You to Death, and declared himself “a meathead”.

But 1991 brought two career-changing films. In Gus Van Sant’s semi-Shakespearean road movie My Own Private Idaho, Reeves played a Prince Hal figure, with River Phoenix as the hustler who’s in love with him; the two actors co-wrote what is now considered the pivotal scene, a campfire heart-to-heart in which Phoenix’s character makes his feelings felt. In what seems indicative of Reeves’s eclecticism, the same year also brought his performance as a gutsy young FBI agent in Kathryn Bigelow’s Point Break, the only known entry in the surfer-heist-action genre.

“Point Break was one of those wonderful surprises,” he sighs happily. “I hear it wasn’t such an easy sell for Kathryn. ‘No, really, he can be an action guy.’ ‘Come on!’ ‘No, really.’ It was such a leap of faith. Thank you, Kathryn! You changed my life!” He also singles out Bernardo Bertolucci, who saw in him the “impossible innocence” required to play Siddhartha in Little Buddha. “When Bertolucci called, well, that was a nice day. Yes, indeed. I’ve had a couple of breaks, which is what we all need. You know, we’re just dust in the wind, after all.” He smiles to himself for smuggling in a Bill & Ted quote.

Despite having worked in the first decade of his career with Stephen Frears (in Dangerous Liaisons), Bigelow, Van Sant, Bertolucci, Coppola (Bram Stoker’s Dracula) and Kenneth Branagh (Much Ado About Nothing), it still took many years for Reeves to shake the general impression that he was, in the unforgettable words of one character in Point Break, “young, dumb and full of cum”. In fact, he has always been merciless with himself; Sam Raimi, who cast Reeves against type as an abusive husband in The Gift, noted his tendency to berate himself after each take. “He has a severe intensity,” Raimi once remarked. “After a take, he’d step outside and you’d just hear him cursing himself. Just shouting, loudly, at himself.” Reeves squirms a little when I bring it up. “Yeah,” he shrugs. “Well, on the Matrix films, for sure I was very particular about the physical side of the acting. I felt that with the aesthetic of what the Wachowski brothers were going for, you know, I was part of that and it was my duty just to make it all look good.”

After Point Break and Speed, the Matrix trilogy ratified Reeves as an action star, and also gave him one of the largest pay-deals in Hollywood history, bringing him an estimated $260m. Not that it’s encouraged him to play it safe. His range remains impressive, taking in everything from middlebrow love stories (The Lake House, The Private Lives of Pippa Lee) and romcom (Something’s Gotta Give) to fantasy (Constantine, The Day the Earth Stood Still) and US independents (Thumbsucker).

When I mention Street Kings, a sinewy little thriller that provided him with a rare latter-day opportunity to return to meathead territory, he smacks his lips: “Ah, Street Kings,” he says, in mock-grand thespian English. “That was almost good. It had a certain … vitality.” I wonder how easily he reconciles himself to those films which don’t turn out as strong as might have been hoped. “It comes with age, doesn’t it?” he says, in a trembling John Gielgud voice which suggests he is about to address me as “dear boy”. The habit indicates not only goofiness, but a desire to keep any serious or prying enquiries at bay. If he’s joking about a subject, chances are he won’t have to address it directly.

Given that he is now four years shy of 50, it would probably be best to make that third Bill & Ted film sooner rather than later. Reeves tell me that there are writers working on it as we speak, and that he’d love to play that good-natured dimwit Ted one last time. “We’ll see what they come up with,” he says. He’s in such cheery spirits that I don’t mind mentioning the matter of Sad Keanu, but there’s a definite downwards shift in room temperature when I do. It’s not that he’s frosty about it exactly; he just seems nonplussed whenever anything pertaining to his image comes up.

He says he heard about Sad Keanu some time after the fact. “I was made aware of it. And I thought it was funny. Yeah. But, you know, it’s still a drag to get your picture taken when you’re eating a sandwich. It’s a downer. Even though, conceptually, what was going on was pretty funny.” He says this evenly, in a way that does not suggest he took any great succour or amusement from the whole episode. He seems uncomfortable with the attention, however benign in essence, and why wouldn’t he be? In the last few years, he has had to contend with a lawsuit from a paparazzo who accused him of assault (the jury cleared Reeves in an hour) and a $3M paternity suit from an Ontario woman who claimed the actor had disguised himself as her husband before fathering her four children. Reeves, who had never met the woman, took a paternity test, and the suit was dismissed.

Still, I’m determined to convince him that there was a heartwarming side to the Sad Keanu affair, so I read him an excerpt from an article by this paper’s Kira Cochrane. “The public feels for him,” she wrote. “We want to protect Keanu because we can tell he’s good.” He stares back at me with a faint smile and says,“That’s nice,” in a way that suggests he considers it to be anything but. Oh dear. I do hope all this talk of Sad Keanu hasn’t made Keanu sad. 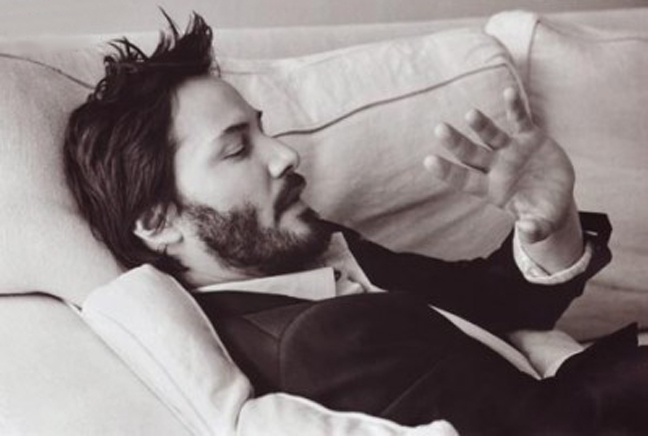