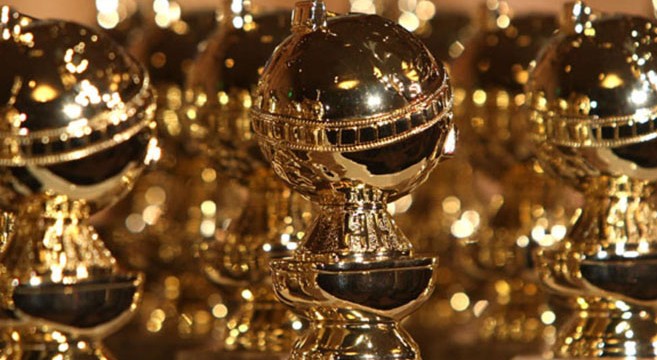 First published January 2011 (ages have been updated for January 2014): Not many people in Hollywood are fearless enough to take on the town’s all-powerful talent agents and tell them “No.” But that’s exactly what Judy Solomon did last week, when she informed CAA, William Morris Endeavor Entertainment, and the other major agencies, that they would not be receiving tickets to this Sunday’s Golden Globe Awards ceremony.  The news has not gone over well, to say the least. But Solomon, a petite, 82-year-old Israeli journalist who wears Jackie O-style suits, chain-smokes skinny foreign cigarettes, and sprinkles her sentences with the word “darling,” is non-plussed.  “So you have some agents who think that they’re stars, what can you do?” Ms. Solomon, who is the Globes’ arbiter of seating, said in a telephone interview.

One can be forgiven for not knowing who, exactly, Solomon is. A 58-year-member of the Hollywood Foreign Press Association (the group of eccentric, international journalists that throws the Globes) most of the year, she is just another anonymous, ink-stained wretch. But come December, she transforms from press junket junkie to all-powerful mistress of ceremonies. She is Hollywood’s own Diana Vreeland-esque social secretary—but with even more influence, seeing as the HFPA operates according to its own quixotic rules. For the Globes ceremony, whose raucous party atmosphere makes it one of the most sought-after invites of the season, the seating battle is particularly ugly. Space is just one issue—the Globes are held in a modest-sized ballroom in the Beverly Hilton. But obtaining tickets from the HFPA is, according to numerous sources, almost always a grueling negotiation process, in which so-called “talent” is the currency to be bartered.  At the center of this frenetic dance is Solomon, whose day job is writing about celebrities for the Israeli magazine Woman’s World.

“Any other day of the week, you would look at her and be like, What? But yet, with the lipstick, in the ‘60’s Chanel suit, she’s the woman. She’s the gal,” said one publicist. “Everyone’s like, ‘Judy, honey, baby, darling…’” Not that Solomon thinks of herself in such grandiose terms. 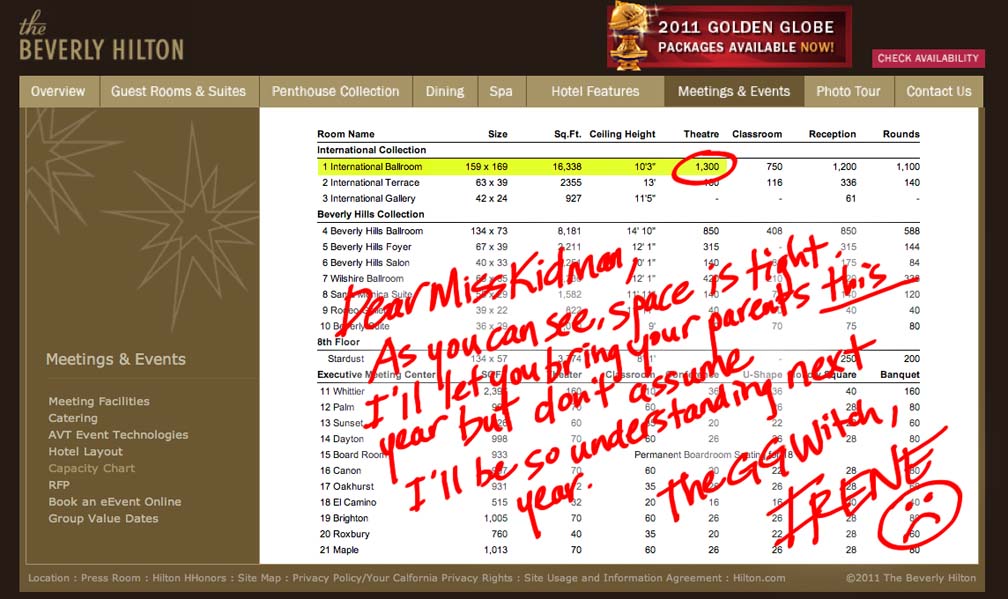 Even more unique in a town where everyone owes someone else a favor, Solomon doesn’t seem to care who she pisses off. Last year, she caused a mini world war when she declared that no agents or managers could sit in the pit (i.e., the area closest to the stage, where the biggest movie stars are seated).  The logic was that too many dark suits in the audience does not make for sexy TV. This ruling prevented CAA partner Kevin Huvane from sitting with his client Meryl Streep, who was nominated for a Best Actress award for Julie & Julia.  CAA’s reaction? “Explosive,” said one source. Huvane “wanted to go with Meryl.” In the end, Huvane went, but was seated in the more bourgeois tier of tables just above the pit.  This year, Ms. Solomon has gone a step further: Last week, the town’s major agencies were alerted that they would not be receiving any complimentary tickets for this year’s event. The agencies have joined forces and are trying to negotiate a compromise, but so far it’s looking like a losing battle.  Ms. Solomon said the reason for her decision was that, in the past, tickets given to agencies did not necessarily end up going to the most VIP agents. But she said that even with the new protocol, agents of nominees will still be accommodated. Already, she’s promised tickets to CAA’s Fred Specktor (who represents Helen Mirren, Geoffrey Rush, and Morgan Freeman) and WME’s Ari Emanuel (whose clients include Mark Wahlberg, Matt Damon, and Martin Scorsese).

It goes without saying that Ms. Solomon sees a fair share of supplication this time of year. Scores of awards consultants and publicists make a pilgrimage to the HFPA’s Swiss chalet-style quarters on Robertson Boulevard in order to cajole, flatter, and outright beg Ms. Solomon for more tickets. The Monday after Christmas, Melody Korenbrot, of the publicity firm Block-Korenbrot, who works with HBO and Sony Pictures Classics, showed up at the HFPA to go over seating for HBO, which received 12 nominations this year (the most of any network), for series such as Boardwalk Empire, and films such as Temple Grandin. Ms. Korenbrat was braced for a prolonged negotiation, but says that she was pleasantly surprised.  “This year, it was a piece of cake. We went in, and they actually got us lunch—pizza and salad—which we sat and ate. Everything got done without a hassle. I didn’t have any problems.”

But based on numerous interviews with publicists and studio and network executives, this scenario is not the norm. “Oh my God!,” said one publicist. “It’s the most horrible part of my life!” The publicist was in the midst of trying to convince an actor’s personal rep to have their client show up at the Globes, as per Ms. Solomon’s demand. It was not going well. Meanwhile, Ms. Solomon was working the phones non-stop. “She is relentless about what she wants,” this person said. “She’ll say, ‘I’m not hearing any bad news now!’”

Said another studio publicist, recalling a past year’s struggle with Ms. Solomon: “It was an absolute nightmare. It literally felt like kissing the ring, and begging and pleading. And the fees were outrageous!” Seats at the Globes start at $600, according to Ms. Solomon, and are paid for by the studios and networks. (Nominees and presenters come gratis.)  On the record, at least, Ms. Solomon has her share of defenders.  “I actually think she’s lovely,” said Amanda Lundberg, co-head of 42West Entertainment Marketing Division. “She’s tough, funny, and honest. She’s kind of the one person who will give you an answer straight-out.”

As for Ms. Solomon, she looks at it this way: “Look, it’s not an easy job. It’s not a pleasant job. It’s very easy to say ‘Yes,’ and it’s not easy to say, ‘No.’” Asked if her elevated status has the town trying to curry favor with her throughout the year, Ms. Solomon laughed.  “No, darling, don’t you know Hollywood? On January 13th (the day after the Globes), they’ll say, ‘Who?’” 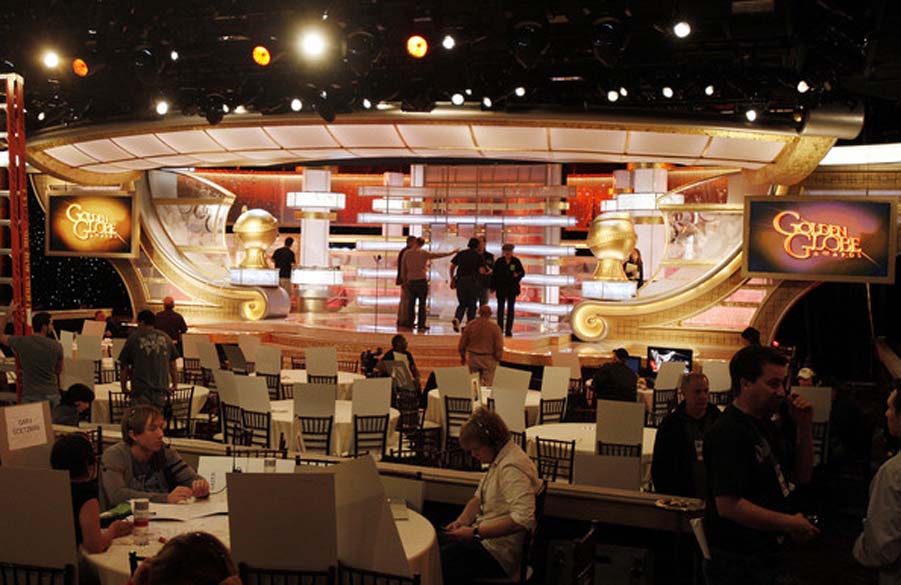 Previous post:
New Study Confirms Demand For Air Travel And Car Ownership Peaked In 2003 Next Post:
The Challenge Of Aging In A Narcissistic World