The abundance of four common species of bumblebee in North America has dropped by 96% in just the past few decades, according to the most comprehensive census of the insects. Scientists said the alarming decline, which could have devastating implications for the pollination of both wild and farmed plants, was likely to be a result of disease and low genetic diversity in bee populations.  Bumblebees are among the most important pollinators of wild plants and agricultural crops around the world including tomatoes and berries thanks to their large body size, long tongues, and high-frequency buzzing, which helps release pollen from flowers.  Bees in general pollinate some 90% of the world’s commercial plants, including most fruits, vegetables and nuts. Coffee, soya beans and cotton are all dependent on pollination by bees to increase yields. It is the start of a food chain that also sustains wild birds and animals.

But the insects, along with other crucial pollinators such as moths and hoverflies, have been in serious decline around the world since the last few decades of the 20th century. It is unclear why, but scientists think it is from a combination of new diseases, changing habitats around cities, and increasing use of pesticides.  Sydney Cameron, an entomologist at the University of Illinois, led a team on a three-year study of the changing distribution, genetic diversity and pathogens in eight species of bumblebees in North America.  By comparing her results with those in museum records of bee populations, she showed that the relative abundance of four of the sampled species (Bombus occidentalis, B. pensylvanicus, B. affinis andB. terricola) had declined by up to 96% and that their geographic ranges had contracted by 23% to 87%, some within just the past two decades.  Cameron’s findings reflect similar studies across the world. According to the Centre for Ecology and Hydrology in the UK, three of the 25 British species of bumblebee are already extinct and half of the remainder have shown serious declines, often up to 70%, since around the 1970s. Last year, scientists inaugurated a £10m programme, called the Insect Pollinators Initiative, to look at the reasons behind the devastation in the insect population.

Cameron’s team also showed that declining species of bee had higher infection levels of a pathogen called Nosema bombi and lower genetic diversity compared with the four species of bee that were not in decline – B. bifarius, B. vosnesenskii, B. impatiens and B. bimaculatus.  The N. bombi pathogen is commonly found in bumblebees throughout Europe but until now has been largely unstudied in North America. The infection reduces the lifespans of individual bees and also results in smaller colony sizes.  The reduction in genetic diversity seen in the declining bees means that they are less able to fight off any new pathogens or resist pollution or predators. “Higher pathogen prevalence and reduced genetic diversity are, thus, realistic predictors of these alarming patterns of decline in North America, although cause and effect remain uncertain,” Cameron wrote today in Proceedings of the National Academy of Sciences.

The collapse in the global bee population is a major threat to crops, and it is estimated that a third of everything we eat depends upon pollination by bees, which means they contribute some £26bn to the global economy.  Other identified causes of bee decline include parasites such as the bloodsucking varroa mite and viral and bacterial infections, pesticides and poor nutrition stemming from intensive farming methods.

“Pollinator decline has become a worldwide issue, raising increasing concerns over impacts on global food production, stability of pollination services, and disruption of plant-pollinator networks,” wrote Cameron. “In accordance with the goals of the United Nations convention on biological diversity to reduce the rate of species loss by 2010, such efforts to elucidate the causes and ecological impacts of bumble bee decline, in co-ordination with informed conservation strategies, will go a long way to mitigating further losses.” 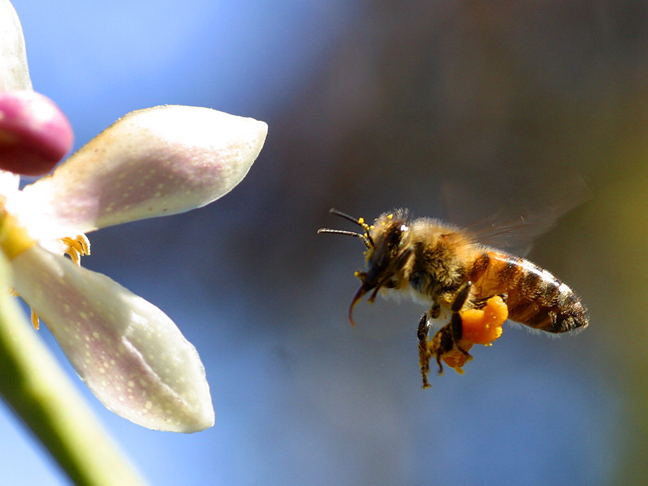