Tilda Swinton Gets A Major Oscar Boost From The New Yorker

From The Daily Beast: The New Yorker‘s Anthony Lane may be the wittiest and most mirthful film critic in America, but he lives in England, and even if he did live at Hollywood and Vine, he’d occupy a rare place in the Hollywood halls of power where people care equally about Oscars and Golden Globes.  So his Top 10 flicks list for 2010 (the first major one I’ve seen) is perversely unuseful for us awards racetrack touts because he refuses to put them in numerical order.  As befits a man whose #3 Rule for Film Critics is “Try to keep up with documentaries about Swabian transsexuals,” he favors foreign films:

But Lane is highly revered in the world of entertainment journalism, and The New Yorker is the most respected magazine in the world, so he may exert a great deal of awards influence.  Toy Story 3 is too enormous and his praise of it too backhanded to affect anybody’s opinion, and his reason for liking The Social Network is odd: it’s “gripped by great animus and hostility but [not] resolved by violent means.” He objects to what most people deem artistically appropriate “unabashed closeups of bloodletting” in Joon-Ho Bong’s Mother, and though he likes Winter’s Bone, he calls its violence “Gothic folly.” Evidently Lane is haunted by the shade of late New Yorker editor William Shawn, who once killed a cartoon about fishing because his was “a vegetarian magazine.” There is one film Lane might help, awards-wise: Luca Guadagnino’s I Am Love, which he elegantly espouses, “showed with fine, Italianate panache how uncontrollable feelings can be held and sustained by an organizing eye.” Somewhere in Scotland, I Am Love producer/star Tilda Swinton, whose 2007 Oscar in Michael Clayton got this movie made (she and Guadagnino have been working on it for eleven years), must be smiling.  Awards voters tend to be old enough to have New Yorkers stacked up in their bathrooms (instead of on iPads or Kindles where they belong).  Now maybe they’ll actually watch those I Am Love screeners stacked up on their DVD piles.

The Daily Beast also ran their own Top 10 candidates for Best Picture nominations this morning, and they’ve even ranked them with the percentage/chance they have of getting the nom: 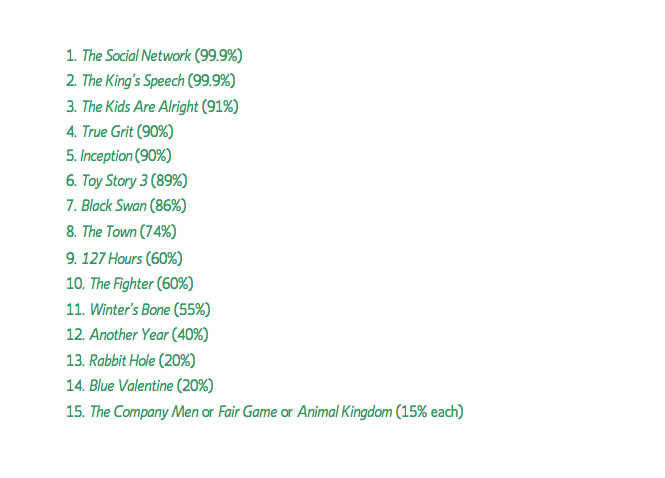 I would love to think that I Am Love (or Tilda) will get recognized, but its chances are so slim considering how it falls outside of the Academy’s tendencies.  Fingers crossed though.  And in the race for Best Trailer, here are my top 3 choices: