The Top 10 Things You Always Wanted To Know About Wine

1. Is drinking wine good for you? Wine is full of healthful compounds that range from tannins and polyphenols to alcohol and that so-called magic bullet: resveratrol.  Studies have shown that moderate wine consumption — that’s a glass or two a day — can lower the risk of heart attack for middle-aged people by some 30% to 50%. Other studies have shown that red wine can raise your good cholesterol while lowering the bad. Some of these benefits are attributed to the resveratrol found in wine. Wines with the highest levels of resveratrol include Tannat and Pinot Noir, especially Pinot Noir grown in cooler climates. It seems that resveratrol, much like acid, can easily be cooked out of grapes. Good news for those lovers of Oregon, Austrian, and German Pinot Noir!

2. Why are there crystals in my wine? Those crystals in your white wine, and even in your red wine, are simply acids — tartaric acid to be precise. Tartaric acid crystallizes out of suspension at cold temperatures. When wines are shipped, especially in the cooler months, they are frequently exposed to temperatures low enough to allow these crystals to form, and they commonly grow attached to the cork.  Much like the sediment of red wines, these crystals are simply extra stuff that the wine doesn’t need any more. They dissolve in your mouth so there’s no danger of being injured by them and they are relatively tasteless and certainly harmless.

3. Why is there sediment in my wine? Sediment is a naturally occurring by-product of the ageing process of red wines. As a wine ages the pigments tend to drop out of suspension. This is often added by the tannins that bond together, forming long chains that become too heavy to remain in suspension within the liquid.  Sediment is totally natural and harmless, though it can impart a muddy, bitter flavor to your wines. So, it’s best to stand the bottle up a few days before drinking and then decant the wine off the sediment into a clean decanter or just another clean bottle.

4. Why do some wines give you a headache? Well, it’s probably not the sulfites, right? Indeed, it probably is not. The most likely culprits are histamines in wine. Red wines have higher levels of histamines than whites, since the histamines are in the skins of the wine and red wines spend time macerating on their skins to extract pigment, tannin, flavors, and, yes, histamines.  Those same tannins and flavonoids tend to help to preserve red wines, resulting in many white wines with higher levels of sulfites than red wines. So, if you’re getting a headache after drinking red wine, it is likely a reaction to the histamines, which can be prevented by taking an antihistamine before starting to drink.

5. What are sulfites and should I be worried about them? Sulfites are naturally occurring elements in wine. In addition to the naturally occurring sulfites, vintners have been using sulfur in various forms for years. Sulfur is used in the vineyards, in the cellars, and during bottling to help protect your wine from spoilage.  Many people believe that the headaches they get from drinking wine are due to their allergic reaction to these sulfites. Truth is, very few people are allergic to sulfites and almost all vintners have been working tirelessly to bring the levels in their wines down. 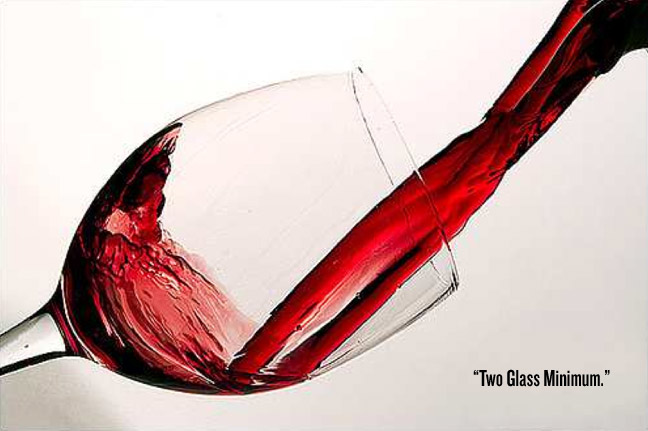 6.  What are the best vintages? Vintages are very region-specific and there are no universally great vintages, though some have came close. Most quality-minded producers only bottle wines they are proud of, so while the vintage does affect the wines, in many cases it’s more a stylistic effect than a qualitative one.  The best vintages are the ones that you like. Some people prefer hot vintages that produce higher alcohol, fruitier, and often jammier wines, but others prefer the lighter-bodied, fresher, higher acid wines of cool or damp years.

7.  What does “vintage” mean? The word vintage simply refers to the year in which the grapes for any particular wine were harvested. A vintage wine may include only grapes from the vintage specified, though many regions do allow a small percentage of an adjacent vintage’s wine to be added to a blend while still allowing it to be called a vintage wine.  Non-vintage wines are generally blends of various vintages, though some wines made in Europe have to label bottles as non-vintage wines due to the fact that the grapes being used are not authorized for that particular region or country.  Much Champagne is non-vintage. This allows the Champagne house to maintain a consistent style from year to year, no matter what the weather brings.

8.  How should I store my wine? Wines are affected by heat, light, and vibration. The 4 tricks to storing wine are simple: keep the temperature below 70F, keep it dark, keep the bottle laying on its side, and leave the bottle alone.

9.  How long does wine last once opened? Wines can last for a day or two once opened, though you can do a few things to help it last longer.  You can refrigerate the wine (wines go “off” once they have been open because they are interacting with oxygen while warm) to slow down the rate of those reactions.  You can remove the oxygen from the bottle to prevent those reactions from happening by: a) transferring the wine to a smaller bottle, b) use a vacuum pump to evacuate the air from your bottle, or c) add an inert gas to your bottle so that it forms a protective blanket (like a gaseous wax seal) over the wine’s surface. These are commonly sold in many wine accessory stores.

10.  What’s the deal with screwcaps? Screwcaps, actually known as Stelvins in the trade, are quickly replacing natural cork in many wine bottles. Natural corks are, well, naturally irregular.  Some produce great seals, others less so, resulting in different bottles of the same wine behaving differently as they age. In addition, natural corks are prone to becoming corked: a chemical reaction, which can happen when bleaching corks, that imparts wines with a taint known as TCA. Screwcaps are perfectly uniform and provide a perfect seal for your wine, avoiding the issues that might arise with cork-finished bottles.  Many of the most high-end wines in the world have switched to screwcaps.  They are, indeed, the wave of the future.