Lamborghini has finally unveiled its newest fighting bull, the Gallardo LP 570-4 Spyder Performante.  It’s the latest in a series of three aggressive new offerings from Lamborghini–the Bolognese-based automaker showed the Gallardo LP 570-4 Superleggera at the Geneva Auto Show and debuted the Sesto Elemento concept at the Paris Motor Show earlier this year. Spyder Performante was first shown at a private event in West Hollywood, Calif., last Friday.  The open-top counterpart to the Superleggera, Spyder Performante is 143 pounds lighter than its predecessor, the Gallardo LP 560-4 Spyder, thanks to the enormous amount of carbon fiber used in its body and components.  Complete specs on the car are yet to come, but Lambo says it’ll have a 5.2-liter, 570-horsepower V10 engine, go from zero to 62 miles per hour in 3.9 seconds and have a top speed of 201 mph. Base price will likely be in the $250,000 range. 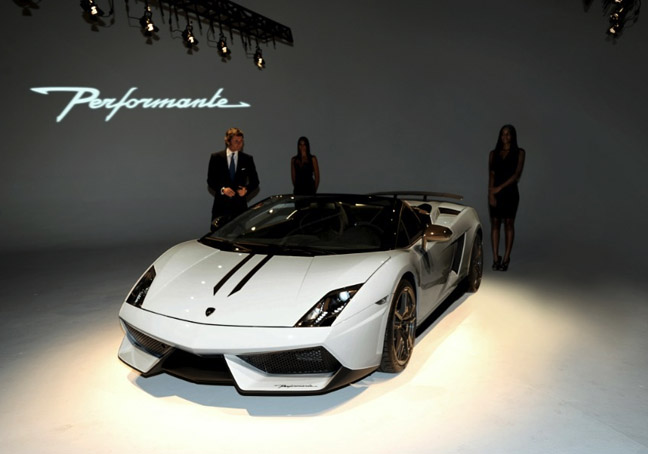