PITCHFORK REVIEW:  Kanye West’s 35-minute super-video, Runaway, peaks with a parade. Fireworks flash while red hoods march through a field. At the center of the spectacle is a huge, pale, cartoonish rendering of Michael Jackson’s head. My Beautiful Dark Twisted Fantasy‘s gargantuan “All of the Lights” soundtracks the procession, with Kanye pleading, “Something wrong, I hold my head/ MJ gone, our nigga dead.” The tribute marks another chapter in West’s ongoing obsession with the King of Pop.

West’s discography contains innumerable references and allusions to Jackson. His first hit as a producer, Jay-Z’s “Izzo (H.O.V.A.)”, sampled the Jackson 5’s “I Want You Back”. For many, his first memorable lines as a rapper came during 2003’s “Slow Jamz”: “She got a light-skinned friend look like Michael Jackson/ Got a dark-skinned friend look like Michael Jackson.” And when West’s recent interview with Matt Lauer on the “Today” show went awry, he took to Twitter, writing, “I wish Michael Jackson had twitter!!!!!! Maybe Mike could have explained how the media tried to set him up!!! It’s all a fucking set up!!!!” Like most everything else, Kanye may exaggerate the kinship, but it’s real. And it’s never more apparent than on Twisted Fantasy, a blast of surreal pop excess that few artists are capable of creating, or even willing to attempt. (Continue reading review here). 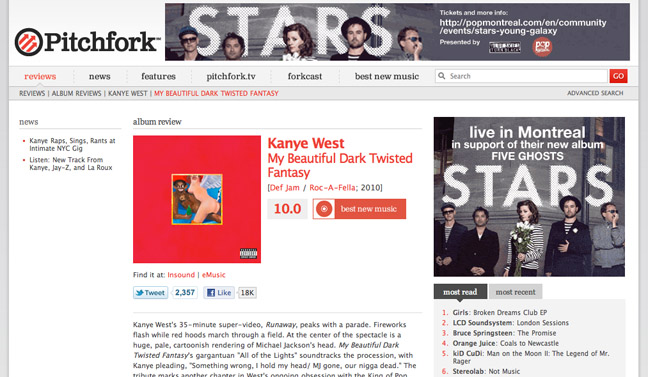