The Ryugyong Hotel In North Korea: Spring Break Capital Of The World

The Ryugyong Hotel is a 105-floor skyscraper under construction in Pyongyang, North Korea.  Its name comes from one of the historic names for the city of Pyongyang, and means “capital of willows.”  The building is also known as the “105 Building,” a reference to its number of floors.  Construction began in 1987, but was halted in 1992 due to the economic disruptions that afflicted the country following the fall of the Soviet Union.  The hotel stood topped out but without windows or interior fittings for the next sixteen years.  Construction resumed in April 2008, under the supervision of the Orascom Group of Egypt, which has invested heavily in the North Korean mobile telephony and construction industries. The company expects to complete exterior work on the building in 2010, with interior work taking until 2012 or later.  The hotel rises to a height of 330 metres (1,080 ft), and it contains 360,000 square metres (3,900,000 sq ft) of floor space, making it the most prominent feature of Pyongyang’s skyline and by far the largest structure in North Korea. 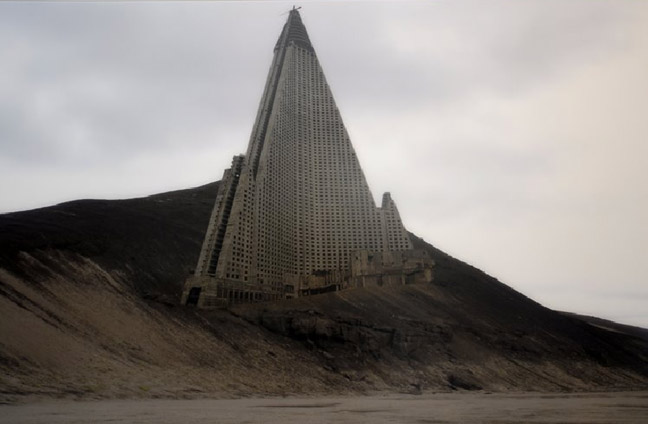