For nearly 20 years, IMDb.com has been a terrific place to look up movie trivia about favorite actors, directors and more.  And this past September, as part of its big 20th anniversary celebration, the site got a serious makeover to “give it a more modern feel — with a heavier emphasis on video clips and helping fans make viewing decisions.” Well, that was the goal, but the reality is that the only thing I feel like “feeling” when I use IMDb these days is the “feel” of the feeling of wrapping my hands around the neck of Col Needham’s throat and giving him a whompin’ bitch slap.  Needham is the 43-year-old British founder and CEO of the once-great IMDb website.  His goal with the makeover was to “emphasize the visual nature of film and TV.” Well, the only thing I feel like “emphasizing” is the word “FAIL!” OK, I’ll stop now.  I just wanted to get that off my chest.

I’ve been working in film for ten years now and use IMDb frequently for research and information.  I consider myself a fairly tech-savvy guy, but this makeover is an epic disaster.  Not to mention the fact that this morning a very good friend called me because upon looking at his latest VISA statement he realized he was charged $60 for the IMDb resume service (which he signed up for).  When he went to the site his resume was nowhere to be found.  Keep up this behaviour Mr. Needham and you’ll end up being known as Internet Movie Douchebag.

Web giant Amazon bought the site back in 1998.  It’s now one of the largest movie sites in the world, with 25.6 million unique visitors in August, according to comScore. 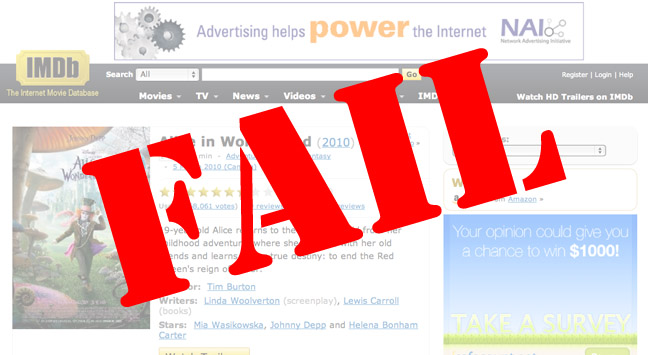 Previous post:
Squirrels Apparently Love Carrots Next Post:
David Letterman Must Really Love The Taste Of That Foot In His Mouth