It appears auctioneers overestimated the power of the dark side.  An original Darth Vader costume from a “Star Wars” movie did not sell at auction Thursday when no bidder offered to pay the reserve price, Christie’s auctioneers said.

The outfit (a jet black helmet, mask and armour) was expected to sell for between 160,000 pounds and 230,000 pounds ($250,000 to $365,000).  The reserve price is confidential but generally it is just under the minimum expected price.  Christie’s said bidding stopped at 150,000 pounds.  The costume is thought to have been made for “The Empire Strikes Back,” the second film in George Lucas’s sci-fi series, released in 1980.  The auction house’s head of popular culture, Neil Roberts, said the costume is one of the most iconic in the history of cinema.  Christie’s did not name the seller, identified only as an American private collector.

Meanwhile, a gun used in an advertising campaign for a James Bond movie was sold for more than 10 times its estimated value at Thursday’s auction of movie memorabilia.  The Walter air pistol held by Bond actor Sean Connery in the poster for the 1963 film, “From Russia With Love,” was sold for 277,250 pounds ($437,206) to an unidentified telephone bidder, Christie’s said. 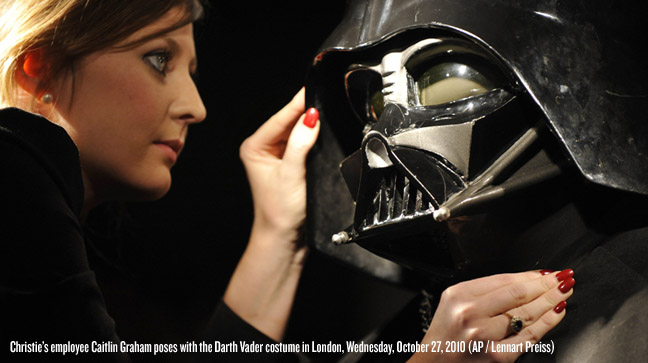