Astrologers Worldwide Warn This Christmas Season Will Be “Living Hell,” Worst In A Decade

My belief in astrology is moderate at best, but when I read this article in The Daily Beast about the upcoming doomsday scenario for this year’s Christmas season I couldn’t help but take notice.  Turns out, the world’s top astrologers are each warning us that this year “there will be more mammoth aggravation and tumult than we’ve seen in a very, very long time.”  Here’s an excerpt:

It starts with Black Friday and Saturday, which they say will be doomed by bad deals and under-stocked merchandise. And shoppers who wait until after December 9 will get stuck with faulty products or presents that no one wanted in the first place.  By mid-December, holiday travelers will be hit with bad weather, mechanical errors and possibly, terrorist threats.  Wars may break out, marriages will dissolve, people will lose their jobs and, as astrologer Gahl Sasson put it, “the whole planet is going to have Tourette’s syndrome.”  But that’s not even the worst of it. The darkest day comes on the Winter Solstice (December 21), when a full moon eclipse will wreak its own special havoc.  “It’s a nightmare,” says New York astrologer Susan Miller.  “People will be in tears.”

Some of this drama is rooted in the infamous astrological aspect known as “Mercury Retrograde” that lasts for three weeks, three times each year.  It is the period when the planet, as viewed from Earth, appears to be moving backward in the sky. Astrology buffs mark their calendars in advance of this phenomenon and brace themselves for computer crashes, accidents of all kinds, lost car keys, misplaced packages, misunderstandings and other everyday chaos.  “When Mercury retrogrades, it scrambles all kinds of information causing confusion almost like static,” says Sasson, who is based in Los Angeles.

This year, Mercury retrogrades from December 10-30, the first time since 2003 that this aspect has fallen at Christmas. And though most astrologers blame Mercury retrograde for minor mistakes, it is also credited with some of history’s most newsworthy debacles as well.  This is the same astrological weather in effect during the January earthquake in Haiti, the Deepwater Horizon oil spill in April, the “flash crash” on Wall Street in May, President Obama’s fumble during his January 2009 inaugural oath, the Bush-Gore election nightmare in November 2000, the Wall Street crashes of 2008 and 1987 and yes, the sinking of the Titanic in 1912.

December’s Mercury retrograde takes place first in the sign of Capricorn (from December 10-20) and then in Sagittarius (from December 20-30), promising to stir tensions inside families and between governments.  “People are probably going to be forceful about their agendas,” says astrologer Ophira Edut, who with her identical twin sister, Tali make up ELLE magazine’s AstroTwins.  “There could definitely be some holiday throw-downs and international tensions rising up between the 20th and 30th.”

But complicating things, astrologers say, are a series of other challenging planetary shifts. As Sasson describes it, on December 13, Pluto, “the planet of death,” Mars, “the planet of war,” and Mercury, “the planet of communications,” will be so aligned as to inspire people to be more manipulative and say things they don’t mean.  The position of Uranus, meanwhile, is making “people … feel their lives are falling apart,” says astrologer Michael Lutin.  “There’s a tremendous, more than ever, level of uncertainty,” says Lutin. “It’s washing like a tsunami over the entire earth.”  Then on December 21, there’s the total eclipse of the Moon in Gemini (which rules aviation), which is square Uranus (which rules the unexpected) that falls during the winter solstice.  This, says Miller, is a recipe for disaster.

You can read the rest of the article here. 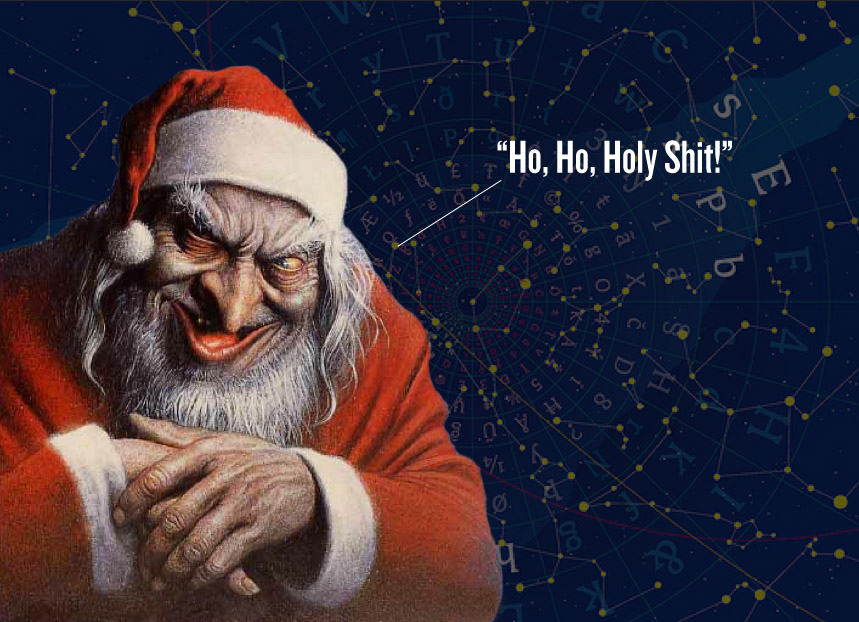