Vanity Fair Publishes Two Behind The Scenes Photographs From The Set Of “E.T. The Extra Terrestrial”

As part of its feature on the history of Industrial Light & Magic, two photos from “E.T. The Extra Terrestrial” were included.  Among others are photos from “Indiana Jones: Raiders Of The Lost Ar,” “Star Wars: The Empire Strikes Back,” and “Jurassic Park.”

In the first photo from “E.T.” an ILM crew member said, “Photographing E.T.’s ship posed a considerable challenge. Due to budgetary constraints, we were limited in the scale at which we could build the ship so it ended up being quite small. Adding to that, Steven wanted the ship to be highly reflective so we had to use huge cards to reflect the warm sky into the ship. We also filmed the miniature at 120 frames per second to give the ship a sense of mass.”

In the second photo, “… E.T. is on a hilltop overlooking the city. We realized the shot using a combination of a miniature set in the foreground and a matte painting in the background for the city. E.T. was a small puppet mounted to a rod that slid down a track, which gave the appearance that he was walking down the hillside toward the city. A lot of what makes this shot successful is the lighting and composition. The foreground looks a bit foreboding, whereas the cityscape has an almost magical quality about it. Hundreds of twinkling lights beckon him. In a way, it reflects what E.T. is feeling at this point in the story.”

You can see the other 5 photographs at Vanity Fair. 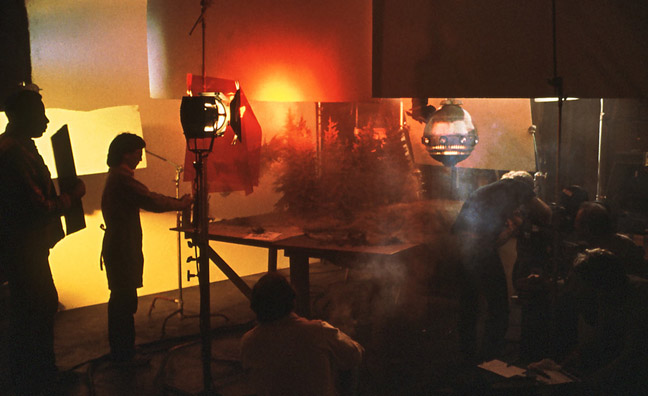 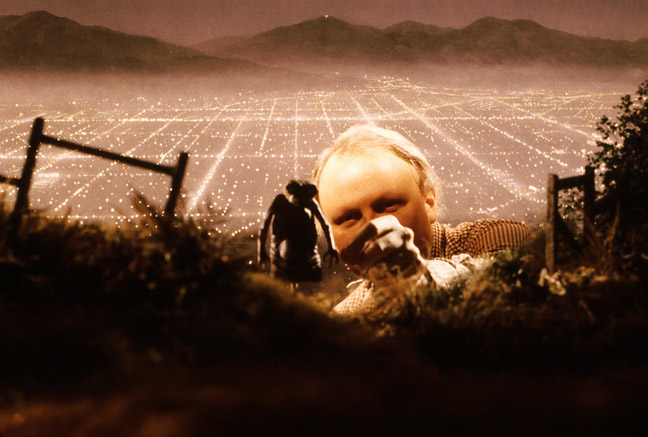