Scientists Capture 3D Image Of Brain In Highest Resolution Ever

A new brain imaging method highlights all the synapses in a mouse cortex, allowing scientists to count these connections between nerve cells in the brain with unprecedented detail.  The high-resolution synapse map could help neurologists better understand how brain cells communicate.

A human cerebral cortex holds about 125 trillion synapses, which are connections among neurons, packed into an ultra-thin layer of tissue. That’s equivalent to the number of stars in 1,500 Milky Way galaxies, according to Stanford professor Stephen Smith.  These electrical interfaces, found throughout the brain, control all our thinking, feeling and movement.  The sheer number of synapses makes it nearly impossible to see them — even the best traditional-light microscopes cannot resolve them all, Smith explained in a Stanford news release.  A single neuron might have tens of thousands of synaptic contacts with other neurons, he said.  But his new method, which involves taking nano-thin slices of a mouse’s cortex, lets scientists actually count the synapses and catalog them according to their type. Called array tomography, it uses high-resolution photography, fluorescent proteins and a supercomputer to put everything together.

Smith and colleagues took a slab of mouse cortex and sliced it into 700-nanometer-thick sections. The sections were then stained with antibodies that would match 17 synapse-related proteins, and the scientists also added fluorescent molecules that glow in different colors in response to light. The antibodies were added in groups of three, and the brain tissue started changing colors. A computer took massive amounts of high-resolution pictures during each staining session, which were ultimately stitched together into a 3-D image.  The result is a map of every synapse’s position in the cortex, with colors corresponding to different synaptic types. Smith, author of a new paper on the method that appears in the journal Neuron, said the brain’s overall complexity is hard to comprehend.

“One synapse, by itself, is more like a microprocessor (with both memory-storage and information-processing elements) than a mere on/off switch.  In fact, one synapse may contain on the order of 1,000 molecular-scale switches. A single human brain has more switches than all the computers and routers and Internet connections on Earth,” he said. 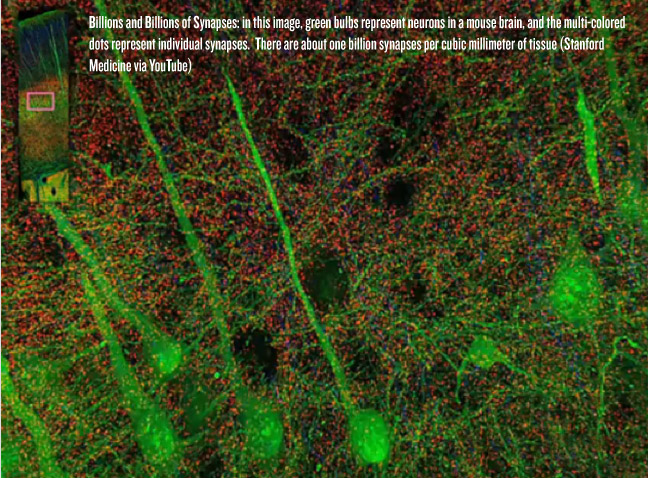 Previous post:
North Korea Could Make Two Nuclear Bombs Per Year Next Post:
Vanity Fair Publishes Two Behind The Scenes Photographs From The Set Of “E.T. The Extra Terrestrial”