When I think of the Royal Family, one image comes to mind: a sad old lady who used to be rich and powerful, but is no longer.  Every time she walks into a room she’s covered pathetically from head-to-toe in her great-great-great-great-great-great grandfather’s jewels and cape and she walks down a line of people shaking every hand.  She loves shaking hands because it gives her something to do, and people love shaking her hand because they feel sad for her (and since granny and grandpa really like her, well, it’s the right thing to do?)

My theory is that royal families, the world over, exist because of a long-standing human need to mythologize power.  The second you put someone or something on a pedestal it creates a default sense of order.  Michel Foucault warned us about this compulsion and once said in an interview:

“Relations of power are not in themselves forms of repression. But what happens is that, in society, in most societies, organizations are created to freeze the relations of power, hold those relations in a state of asymmetry, so that a certain number of persons get an advantage, socially, economically, politically, institutionally, etc.   And this totally freezes the situation.  That’s what one calls power in the strict sense of the term: it’s a specific type of power relation that has been institutionalized, frozen, immobilized, to the profit of some and to the detriment of others.”

But I would add to that the idea that during an “event” such as a royal engagement, there is another piece of the power puzzle at work: the power of public relations.  Every royal family understands that in order to survive you not only have to crank out babies, but you also have to uphold the myth of the prince and the princess living happily ever after.  And time after time, monarchists the world over buy into it.  In some people I saw the same frenzied reaction to Will’s proposal to Kate as you would see if you slipped a bum on the street a 40oz of rhum and pack of smokes.

In 2006, The New York Times wrote a piece on the antiquated mythology of the princess and why it continues to pop-up over and over again.  With all of the overwhelming economic changes going on in Britain right now, the article is even more relevant today:

Some scholars I spoke with say that given its post-9/11 timing, princess mania is a response to a newly dangerous world. “Historically, princess worship has emerged during periods of uncertainty and profound social change,” observes Miriam Forman-Brunell, a historian at the University of Missouri-Kansas City.

It makes perfect sense that, at least for some people, the Royals represent a structured, stable island in the midst of a stormy sea of change.  What doesn’t make sense is the perpetuation of this dog and pony show in a world in such a huge state of need.   It’s one thing for a mother and daughter to watch this wedding on television, but the outrageous cost of this Family’s expenses, property, and treasures is something that must come to an end.  I don’t understand how any fan of the monarchy would ever be able to keep a straight face while criticizing the Vatican for their hoarding of diamonds, gold, and silver.  I’ve never been a huge Morrissey fan, but I wholeheartedly agree with him when he said:

“I despise royalty.  I always have done.  It’s fairy story nonsense, the very idea of their existence in these days when people are dying daily because they don’t have enough money to operate one radiator in the house;  to me it’s immoral.”

As a Canadian, every time someone brings up our connection to the Windsors, the cringe factor is unbearable.  I almost have to leave the room it is so mortifying.  I actually don’t have any ill will towards Will & Kate as people.  They both seem like exceptionally mature young kids.  But my dream would be to wake up tomorrow and find out that these two had run down to city hall and took care of the business in less than 20 minutes.  The spectacle and lead-up to this wedding is a million times worse than nails on a chalkboard.

The Royals are my kryptonite.  And they will remain as such until the day the Royals donate every last penny of their fortune in one of the most brilliant gestures of philanthrophy the world has ever known. 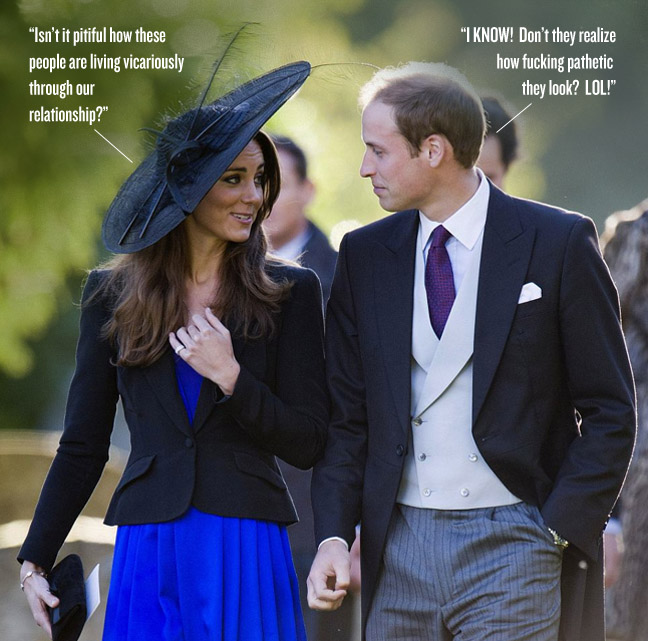