The National Library in Alipore, India has always been reputed to haunted.  Now things just got a whole lot more bizarre: a mysterious room has been discovered in the 250-year-old building a room that no one knew about and no one can enter because it seems to have no opening of kind, not even trapdoors.  The chamber has lain untouched for over two centuries.  The archaeologists who discovered it have no clue either, and their theories range from a torture chamber, to a sealed tomb for an unfortunate soul, to a treasure room.  Some say they wouldn’t be surprised if both skeletons and jewels tumble out of the secret.

Belvedere House, as the National Library building was known during the Raj, was among the many buildings Mir Jafar built in Alipore in the 1760s after he was forced to abdicate his throne in Murshidabad.  He gifted it to the first Governor General of India, Lord Warren Hastings.  What happened to the house between 1780, when Hastings is said to have sold it, and 1854, when it became the official residence of the Lt Governor of Bengal, is uncertain.  But from 1854 to 1911, Belvedere housed a number of Lt Governors until the British capital shifted to Delhi.

After Independence, the National Library (which was then in Esplanade) was shifted to Belvedere House.  Since the Belvedere House is of great architectural and heritage value, the massive collection of books has been moved to a new building on the 30-acre campus while the old building is getting restored.

The ministry of culture that owns the National Library decided to get the magnificent building restored by the Archaeological Survey of India since it is heavily damaged.  Work has already started. It was while taking stock of the interior and exterior of the building that ASI conservation engineers stumbled upon a blind enclosure on the ground floor, approximately 1000 square feet in size.

A lot of effort has been made to locate an opening so that experts can find out exactly what it was built for or what it contains. But there is not a single crack to show.   “We’ve searched every inch of the first floor area that forms the ceiling of this enclosure for a possible trap door, but found nothing.  Restoration of the building will remain incomplete if we are not able to assess what lies inside this enclosure,” said deputy superintending archaeologist of ASI, Tapan Bhattacharya.  “We’ve come across an arch on one side of the enclosure that had been walled up. Naturally speculations are rife,” said another archaeologist.

Was it used as a punishment room by Hastings or one of the Lt Governors who succeeded him?  It was common practice among the British to “wall up” offenders in “death chambers”.  Some sources say this enclosure has exactly the same look and feel.  The British were also known to hide riches in blind chambers as this.  “It could be just about anything.  Skeletons and treasure chests are the two things that top our speculations because it is not natural for a building to have such a huge enclosure that has no opening. We cannot break down a wall, considering the importance of the building.  So we have decided to bore a hole through the wall to peer inside with a searchlight,” said D V Sharma, regional director, ASI.

National Library authorities have written to the ministry of culture seeking permission for this.  “The ASI cannot drill into a building of such great historical significance as this without permission.  So we facilitated this as caretakers of the building,” said director of National Library, Swapan Chakravorty.  The matter of the blind enclosure was recently raised in a meeting of the committee of experts that has been formed by the Centre to advise the ASI on restoration-related matters of the National Library.  “The ASI raised the issue of the enclosure in the last meeting of the committee. We are eagerly awaiting the first look inside,” said historian Barun De, chairman of the committee. 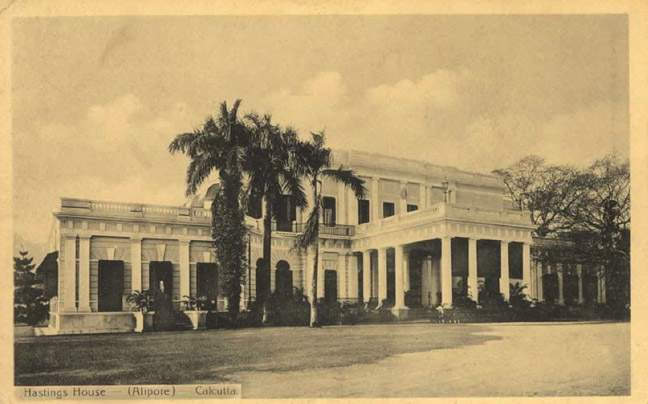 Source: The Times Of India