FEELguide Editorial | by Brent Lambert (November 21, 2011): When I was a kid I was a little bit chubby.  Not crazy chubby, just well insulated.  And I loved food (still do).  Occasionally I would open the fridge door and stare at everything inside, sometimes for minutes, surveying every item until I found what it was I was looking for.  Sometimes I would even stare for that long knowing deep down inside that there was nothing in there I was actually interested in.  I just had a compulsion to look.  Lately I’ve realized this is the same relationship I’ve been having with Facebook.  I’ll open it up, look around for an unacceptable amount of time, knowing that there is nothing in there I need.  Not a single thing.  The question I’ve been asking myself over the past couple days is this: why do I bother looking inside?

I’ve had my Facebook account for roughly 4 years and in that time, like everyone else, I’ve watched the network explode in popularity.  I’ve watched friends who, after years of resisting, finally caved into the machine and opened their own accounts.  It seems that Facebook has somehow become the world’s phonebook.  And it’s not without its merits.  Facebook is thoroughly fascinating in how it’s changing the way we communicate and socialize with eachother.  At its best, it can bring people closer together, cause revolutions (such as the protests in Iran and other parts of the world), and give people a voice who were too shy to have had one before.  Unfortunately, at its worst, it’s also caused an explosion of two other things which never come with a happy ending: ego and addiction. 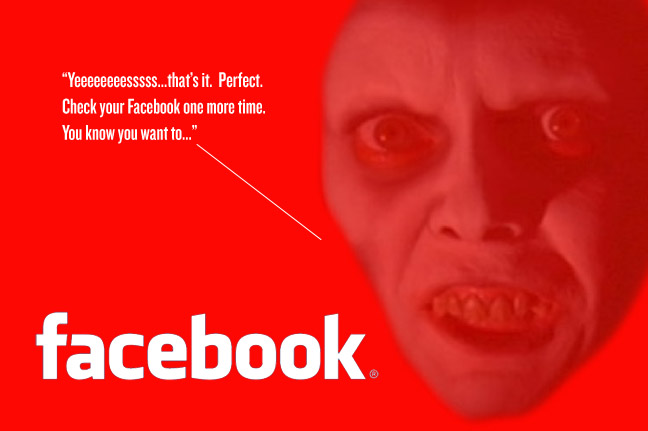 There have been studies that have proven the “happiness factor” that comes with online social networks.  Humans are social creatures and we always will be.  In one of the most thoughtful lines of music of all time, Barbra Streisand proclaims “People who need people are the luckiest people in the world.” Damn straight, Barbra.  But as a study in contrast, I would have to say that people who need Facebook are not the luckiest.  Just like people who need cigarettes or vodka or drugs or drama or x, y, or z, Facebook can often have an addictive dark side.  And just like that fridge door, I sometimes open it a little too often.  My personal challenge to myself from now on is to make sure I’m opening the door for the Streisand reason instead of the nicotine reason.  Almost certainly this means I will be opening the door much less.  I think I’ve completely exhausted my reservoirs of interest in who checked into where, or who likes what, or who just ate a burrito at their favorite Mexican restaurant.  I’m not sure what Elizabeth Gilbert thinks of Barbra Streisand’s words, but I saw an interview with her where she explained her thoughts on human relations and why we do need people.  She elaborated that we’re a bit like porcupines in the cold: we need to be near eachother in order to survive, but we shouldn’t get too close or we run the risk of stabbing eachother.  Facebook, for all its goods and bads, often makes me feel like I’ve been pricked by a bunch of quills (or quilled by a bunch of pricks).

I think part of the reason I started FEELguide was to give myself a platform to express how it is I see the world around me and share that with people who are interested.  At least for me, Facebook has turned into that party that keeps getting louder: the DJ is slowly (almost unnoticeably) turning up the music throughout the evening and people don’t realize how loud they’re speaking about things that need not be spoken so loudly.  I’m no longer as comfortable with sharing my thoughts and ideas in the Facebook theatre as I used to be, because it’s a theatre that has grown to be too chaotic for my personal taste.  I just left that party for a little break to step outside for some peace and quiet and fresh air for a change.  So if you want to come by and hang out with me here at The FEELguide Theatre I would love that.  But I think my Facebook fridge door is something I should keep closed for a little while.  I don’t want my ego to get any chubbier than it already is and I certainly no longer want to be addicted to, or celebrate, the vacuous banality of every single last mundane detail of the human experience.

A very wise friend of mine did a cleanse a few years back.  Somehow that 10-day bowel cleanse magically transformed into a  lifelong spiritual cleanse: yoga, career, love,  and yes: Facebook too.  And she is reaping the rewards.  She has simply never looked better or felt better.  Being around her is like being around the Dalai Lama himself — a magnetic, all-encompassing feeling of warmth.  I’m not saying her Egobook / Addictbook / Facebook detox was the only reason for her new-found happiness; but it most certainly helped.  One day a while back I asked her why she’s never on it.  Her answer was, “It’s not good.” I think that sums it up quite perfectly.