The Dinner Party Of My Dreams

I posed a question to myself today: “If you could invite 6 people over for dinner, drinks, and hours of fun, who would they be?” I restricted it to living people because I can’t stand it when people ask “If you could meet anyone who’s dead who would it be?”  I’m sorry, but I have zero interest in that crap because it ain’t never gonna fuckin’ happen.  At least if these people are alive there’s a semblance of possibility to it actually coming true.

Like any dinner party, chemistry is key.  So I wanted to have a group that would work well together.  For example, if George went too far with his allusions to political philosophers, Amy could reel him in by sparkin’ up a joint.  If Maureen went off on a tirade about Bill Clinton, Natalie could pull out a story of all the beefcake millionaire fratboys she boinked at Harvard.  And if Bill crossed the line with his thoughts on Muslim vs. Western World civilizations, Tilda could compensate with stories of her wild passionate love for her hot painter boyfriend (whom her husband is totally cool with).

I think part of this dream was rooted in the arctic blasts of air that are headed our way now.  Winter is dinner party season after all and I, for one, can’t wait.  Sometimes around November I get the feeling like everyone’s waiting for a bomb to go off, but those thoughts always disappear whenever you get your buddies together.  So I’m just throwing this out there: Tilda, Maureen, George, Bill, Natalie and Amy: how does next Thursday night sound? 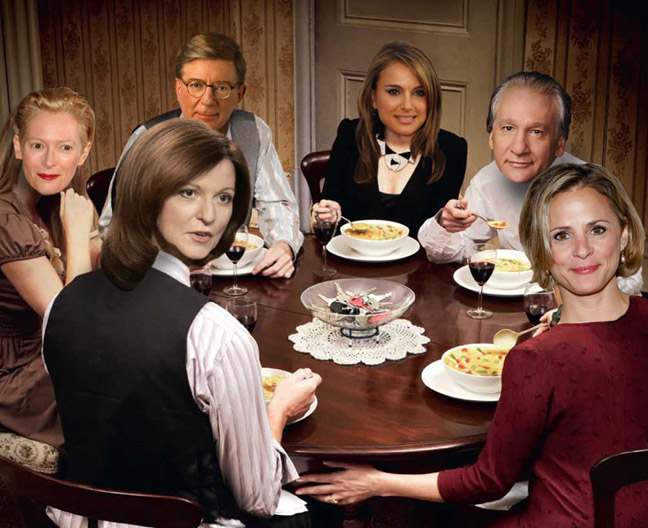 And for your viewing pleasure, here’s a taste of what the party might be like (sorry Natalie, my thumbnail gallery is doing weird things and hid your video … I’m workin’ on it though):