Why Are School Buses Yellow?

The other day my friend Martin was telling me a story about some friends of his from London that were visiting Montreal.  One day he took them for a walk and one of the Brits screamed out with a big smile, “Oh my God!  It’s the Freddy Krueger bus!” when they saw one of the city’s yellow school buses pass by.  I got such a kick out of that and it got me thinking: why are school buses yellow?

Growing up in the Ottawa Valley, both my elementary school and high school were located in the largest population radius of any other school system in Canada.  This meant that the kids who boarded my school bus first (i.e. in the outskirts of Matawatchan at approximately 7:30am) had the longest bus ride of any other student in the country.  I boarded at 8:15am and arrived at Eganville District Public School at 8:30am, and from September 1989 onwards I stayed on the bus a bit longer to arrive at Opeongo High School at around 8:45am.  Joey McMahon was our bus driver and he’s still going strong.  In some cases, Joey has been the school bus driver for 3 generations of children.  Canadian students generally spend 190 days at school every year, so that means I’ve spent 2,850 days in elementary/high school, and spending one hour total on that yellow school bus everyday means I’ve spent 2,850 hours (119 days) on the Freddy Krueger shuttle.

The yellow color used for North American school buses actually has a copyrighted name: “National School Bus Chrome™” and was established as such in 1939.  In April of that year, Dr. Frank Cyr, a professor at Teachers College of Columbia University in New York, organized a conference that established school-bus construction standards for the United States and Canada.  The officials approved the standardized use of the “California Top” design which featured a slightly curved reinforced metal roof, with windows separated by pillars at regular intervals (and each window was adjustable by the use of a latching mechanism).  The fundamentals of this design have remained virtually unchanged over the past 80 years.  One of the standards set during this conference was the benchmark color of yellow, and it became known officially as “National School Bus Chrome™.” The color was selected because black lettering on that hue was easiest to see in the semi-darkness of early morning.  Since then, the name has been changed to “National School Bus Glossy Yellow™.”  The conference met for seven days and the attendees created a total of 44 standards, including specifications regarding body length, ceiling height and aisle width for the buses.  Paint experts from DuPont and Pittsburgh Paints participated.  Dr. Cyr’s conference, funded by a $5,000 grant from the Rockefeller Foundation, was also a landmark event inasmuch as it included transportation officials from across North America, as well as specialists from school-bus manufacturing and paint companies.  The color was adopted by the National Institute of Standards and Technology as Federal Standard No. 595a, Color 13432.

The conference approach to school bus safety (as well as the yellow color) has endured into the 21st century, and Dr. Cyr became known around the world as the “Father of the Yellow School Bus.” 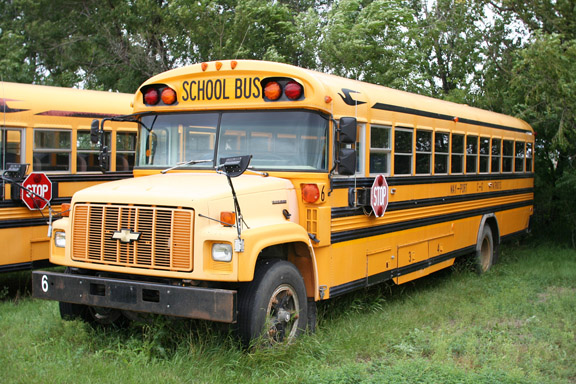 Previous post:
Dave Franco Interviews James Franco For “Esquire” (Or Is James Interviewing Dave?) Next Post:
The Long-Lost Stanley Kubrick Interview Where He Discusses The Concept And Meaning Behind “2001: A Space Odyssey”