What Do Croissants, The 1683 Battle That Saved Western Civilization, And Marie Antoinette Have In Common?

For many years, Eastern and Central Europe was under constant threat of invasion by the armies of the Ottoman Turks. History might have been very different if the Islamic Turks had managed to defeat the West in any one of a number of key battles. One of these battles took place in 1683 during the Siege of Vienna. In addition to saving Western Civilization as we know it, the West’s success in that battle is believed to have given us one of our favorite breakfast foods … the croissant.

In 1683, Vienna (the capital of Austria) was under siege by over a hundred thousand Ottoman Turks. After several months of trying to starve the city into submission, the Turks attempted to tunnel underneath the walls of the city. Fortunately for the entire city, some bakers hard at work in the middle of the night heard the sounds of the Turks digging and alerted the city’s defenders. This advance warning gave the defenders enough time to do something about the tunnel before it was completed. Soon, King John III of Poland arrived at the head of an army that defeated the Turks and forced them to retreat.

To celebrate the end of the siege and the part they had played in lifting it, several bakers in Vienna made a pastry in the shape of the crescents they had seen on the battle flags of the enemy. They called this new pastry the “Kipfel” which is the German word for “crescent” and continued baking if for many years to commemorate the Austrian victory over the Turks in 1683. It was not until 1770 that the pastry came to be known as the croissant.

In that year, Marie Antoinette, a 15 year old Austrian Princess, married King Louis XVI of France. To honor their new queen, the bakers in Paris made some “kipfels” of their own. The only difference was that they called it by the French word for crescent, “croissant”. The pastry proved as popular in Paris as it had in Vienna and Parisian bakers have been making it ever since as have bakers around the world who learned it from the Parisians. 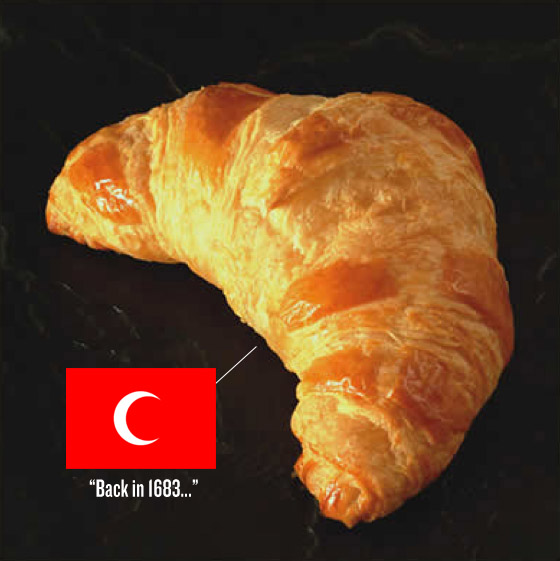