The Sewer Pipe Analogy: What Bandwidth REALLY Is And Why Faster Networks Are Currently Under Construction

Glenn Fleishman is a Seattle journalist who writes about Wi-Fi, Apple stuff, and other tech for The Economist, TidBITS, and Ars Technica. His latest book is Five-Star Apps.  In this article, Glenn breaks down in comprehensive analogy what exactly a bandwidth is, the problems with our current infrastructure, and why a new one is currently being built:

Let me start all folksy with analogies. For simplicity’s sake, let’s consider a medium-sized city that serves water to all its residents through one central reservoir. The reservoir’s capacity represents the total pool of water it can deliver at one time to residents through pipes of varying sizes and at different distances. The diameter of the pipe, of course, determines how much water can pass from the reservoir to your particular tap. All of the pipes are from somewhat to very leaky, so the diameter only represents the potential water you could receive at any given time (under the same pressure), while the leaks reduce that. You receive your raw diameter’s water after those leaks take their toll. For people who live far away from the reservoir, I turn the pressure way down, because too much water leaks out. Thus, they receive less water with taps wide open than their pipes’ diameters would suggest. In nearly every part of town, the pipes bringing water to neighborhoods have way too many smaller diameter pipes feeding homes and businesses. If everyone flushes his or her toilet at once, only a trickle of water flows out, albeit continuously. I’m cheap, too, in my thought experiment water system: I’ve brought very small diameter pipes into many areas so that the diameter of every home or building’s feed is greater than that of the pipe that feeds a whole neighborhood. What a bastard. Finally, I designed this city water supply in a peculiar fashion. In normal city systems, water is under pressure through the system all the way to your tap. When you open up a faucet, the pressure immediately pushes water out. The quantity is relative to the aperture of your faucet and the system’s pressure. At 80 psi, you can get a shower head that sprays out one gallon per minute or two. But in my system, your faucet’s handle is directly and mechanically connected to a pipe far away from your home, at a water distribution point or back at the reservoir. Each time you turn off a faucet the valve at the far end is shut down and all the water drains out. When you need water, you have to wait for the faucet to open up that remote valve, and for the water to reach you from wherever it starts. CONTINUED …

And it gets even more informative as you read on.  Read the full article here. 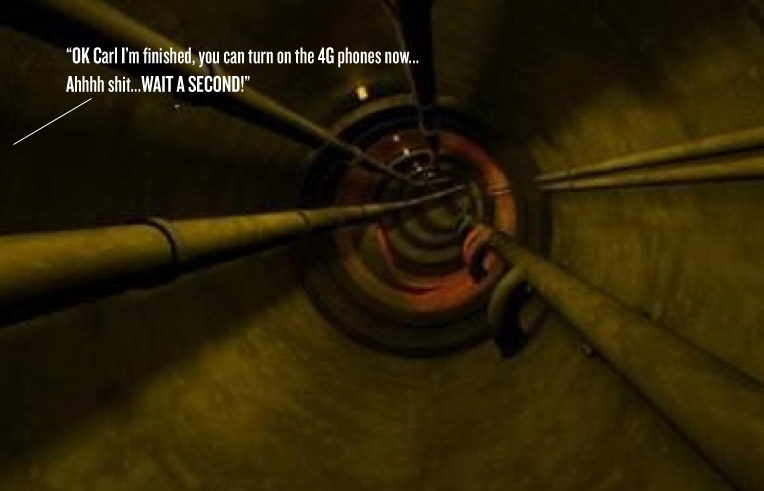