The Guardian has this review of the new book The Story Of Eames Furniture which looks at the incredible relationship that this husband and wife design power duo shared.  The author goes behind-the-scenes of the legendary studio and, after interviewing many people who worked in the studio decades ago, paints a surprising picture of how things really got done:

Type the word “Eames” into Ebay and you’ ll have more than 10,000 pieces of furniture to choose from, many of them indeed designed by Charles and Ray Eames, but most of them not. You’ll find “Eames” attached to everything from Danish modernism to frumpy old velvet sofas. In fact, anyone selling anything remotely mid-20th-century simply whacks on that word to improve their search ranking, sometimes qualified with the word “era” . This is how e-commerce pays homage to the Eameses, the most important figures in the history of American design, and two of the most influential figures in 20th-century design full stop.

As with all legends, it’s perhaps good to be reminded that the Eameses were only human. The couple, who married in 1941 and gave their name to a form of American modernity that is still highly prized today, came to be seen as the king and queen of a kind of design Camelot. However, a new book, The Story of Eames Furniture, sets out to demythologise this power couple, and in exhaustive fashion. This lavishly illustrated, two-volume, 800-page beast aspires to be the definitive work on the designers. Certainly, it is a labour of love. The author, Marilyn Neuhart has been working on the book for 15 years. Her husband, John, a graphic designer, actually worked in the Eames office in the late 1950s, and together they collaborated with the Eameses for the next two decades. So if anyone still knows what it was actually like in that famous studio in the Bay Cities Garage in Venice, California, they do.

There have been many books about the Eameses, but this one is different on two counts. Firstly, and most importantly, it aims to tell the story of Eames furniture not through the famous couple themselves but through their staff – the unsung heroes who figured out how to bend the plywood and weld the metal wires into the iconic chairs for which the Eameses are best known. Secondly, and more controversially, it aims to downplay or – let’ s not mince words – demolish the notion that Ray Eames made any significant creative contribution to the designs produced by the studio. You can forget the whole Charles and Ray thing, according to Neuhart, because the “and Ray” part was a façade created by the couple themselves, and then reinforced after their deaths by various designers and writers who, she argues, were not privy to the day- to-day life of the studio.

Neuhart is at pains to point out that Ray, who was a painter, had neither design skills nor managerial ability and was more often than not an obstacle to the work. “She could derail a project meeting in five minutes by singling out and labouring over the most inconsequential detail,” writes Neuhart. When credit is deemed to be due, it comes as crushingly faint praise: Ray was good at picking colours, she was a mean flower arranger and boy could she throw an afternoon ice cream party. The picture is so unflattering you almost wonder whether the author has some personal score to settle.

As to how much of this character assassination is true, it’s difficult to say. Certainly Ray did design some famous covers for the influential journal Arts & Architecture, as well as the wooden stool-tables of 1960 and various textile patterns. I find it hard not to believe that her aesthetic sensibility played some part in defining the Eames work. Yet even Charles apparently felt that “one of the greatest myths about 20th-century design is that Ray is an equal partner in the office”. This last remark, it should be pointed out, is an indirect quote recalled by a staff member. But if he did say it, then why the pretence of a creative duo?

Read the full article at The Guardian. 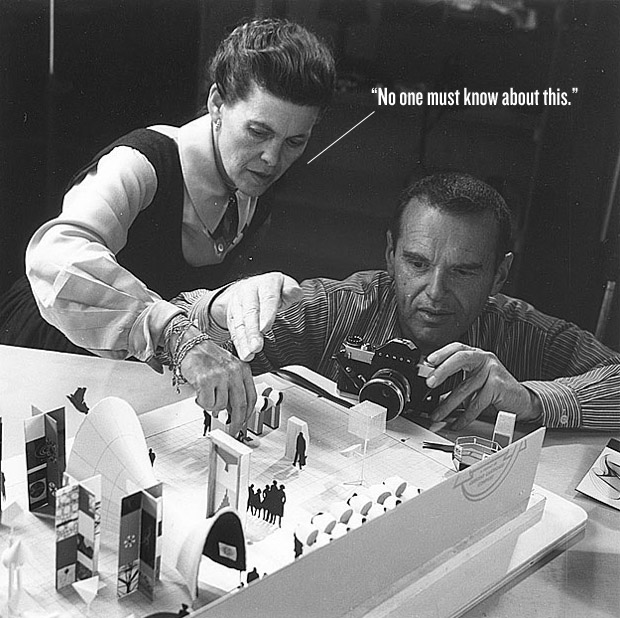