Engadget just broke the news yesterday of Playstation’s foray into the telephone market.  They’re the first to reveal the prototype of the phone:

It’s hard to believe that what we’re looking at is real — but we assure you, the picture above is in fact the PlayStation Phone you’ve long been waiting for. As we reported back in August, the device you see is headed into the market soon, likely boasting Android 3.0 (aka Gingerbread), along with a custom Sony Marketplace which will allow you to purchase and download games designed for the new platform. The device snapped up top (and in our gallery below) is sporting a 1GHz Qualcomm MSM8655 (a chip similar to the one found in the G2, but 200MHz faster), 512MB of RAM, 1GB of ROM, and the screen is in the range of 3.7 to 4.1 inches. Looking almost identical to the mockup we hit you with this summer, the handset does indeed have a long touchpad in the center which is apparently multitouch, and you can see in the photos that it’s still bearing those familiar PlayStation shoulder buttons. For Sony buffs, you’ll be interested to know that there’s no Memory Stick slot here, but there is support for microSD cards.

The particular model in these shots is still in prototyping mode. As such, the unit doesn’t have a custom skin (not even SE’s Timescape design seen on the Xperia devices), and is said to be rather buggy. We’re digging into more facts as we speak, but it’s likely that much of what we reported earlier is still accurate, and though the device could still be headed for a 2010 release, 2011 is looking much more realistic. Still, there’s a lot of time between now and the holidays… so keep your fingers crossed! 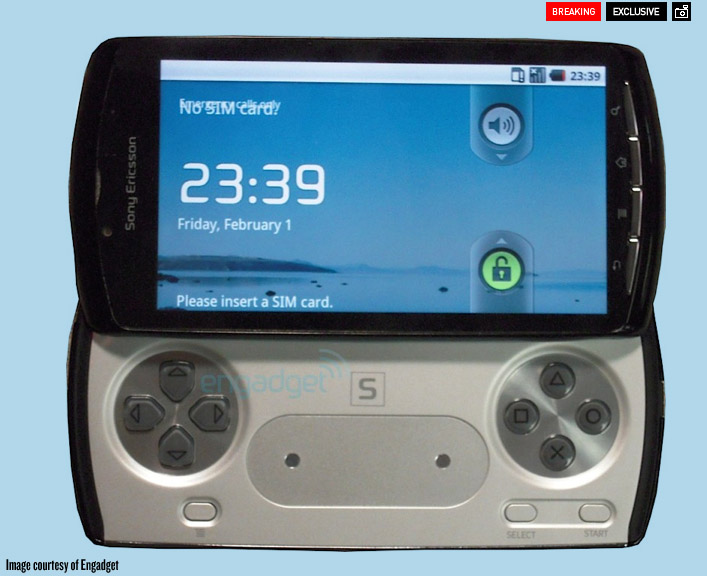 Source: Engadget and The Daily Beast