The Powerful Story Of Galileo’s Daughter

Galileo Galilei, perhaps one of the greatest minds ever, began modern astronomy by using a telescope to make his observations of the evening sky. His work with weights and surfaces was a forerunner to later developments of Isaac Newton. His acceptance of the Copernican Theory caused him much trouble with the Catholic Church.  There was more to the man than these dry facts though.  Galileo only ever loved one woman. He never married her, though they produced three children together. Although he only officially recognized his son, he provided for all three children in a manner consistent with the times.

, he tells the story of Galileo’s life, as well as tells the story of the life of his illegitimate (but beloved) daughter, whom he put into a convent as a young girl. She had to renounce the world … yet she and her father remained devoted to one another (even through his trial/inquisition). His letters to her have been lost, sadly, but all of HER letters are still around, and were sitting in a library in Rome, I think, collecting dust. David Sobel, researching some other project, heard that there was this huge archive of letters from “Suor Marie Celeste” – Galileo’s daughter – and they had never been translated into English. Sobel sensed that there was a huge story there, one that had yet to be told, so she went to Italy, translated the letters himself, and wrote this wonderful book. Part science, part biography, part epistolary memoir, it gives an insider’s view (through her incredible letters to her famous father) of that world.

One of the things I find most moving about her letters to him, is that she never doubted his faith, at a time when he was being treated like a heretic. His discoveries about the universe didn’t shake HIS faith, and didn’t shake her faith either. Even though she lived in a cloister, she still was aware of his scientific explorations, and discoveries … and never once did she question him, or back off from him. It can’t have been easy for her since she was a nun in the Church that was persecuting him. Judging from her letters, she remained steadfastly supportive, saying that his discoveries merely expanded her own love for God, since he obviously was so much more powerful and imaginative than previously thought. Extraordinary. 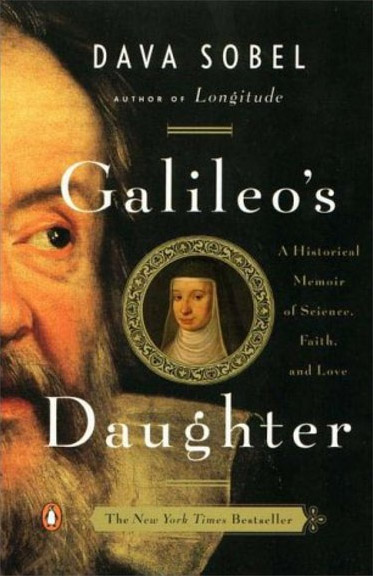