A new video has been released for Antony And The Johnson’s “The Spirit Was Gone”, from their new album Swanlights, which is out today via Secretly Canadian. The video features footage of the late performance artist Kazuo Ohno, who can also be seen on the cover of 2009’s The Crying Light (an album which was dedicated to Ohno).

Kazuo Ohno (October 27, 1906 – June 1, 2010) was a Japanese dancer who became a guru and inspirational figure in the dance form known as Butoh. It was written of him that his very presence was an “artistic fact.“ Mr. Ohno’s solo performances, for which he was known, were irresistibly powerful and fraught with ambiguity. A humanist, he communicated the themes of the form through identifiable characters, most often flamboyantly female. The tottering women whom he personified onstage, his body twisted and grotesque, were both forces of nature and fragile creatures with flapping shoes and skewed wigs.  In this, Mr. Ohno also embodied the dual nature of Butoh, developed in Japan after World War II. It mines the primeval darkness of life and death in harrowing theatrical physical imagery yet is also capable of the dramatic equivalent of raucous, often bawdy laughter.  In 1938, Ohno was drafted into the Japanese Army as a lieutenant, and later rose to captain. He fought in China and New Guinea, where he was captured and interned by the Australians as a prisoner of war.   The war and its horrors provided him with inspiration for some of his later works, such as “Jellyfish Dance“, thought to be a meditation on the burials at sea he had observed on board the ship transporting soldiers back to Japan.  Mr. Ohno remained active virtually his entire life. His last performance outside Japan was in 1999 at the Japan Society, where he presented a retrospective called “Requiem for the 20th Century” with Yoshito.  His last Japanese performances were in 2007.  Past his 100th year, he sometimes “danced” with his hands alone or crawled on all fours to communicate with his audience, making use of the working parts of a body ravaged by illness and age, perhaps the perfect metaphor for the dark art of Butoh.  (The New York Times)

Ohno once said of his work: “The best thing someone can say to me is that while watching my performance they began to cry. It is not important to understand what I am doing; perhaps it is better if they don’t understand, but just respond to the dance.” Read The New York Time‘s feature on the legendary Kazuo Ohno here.  You can also visit Antony & The Johnson’s site for more info on their music. 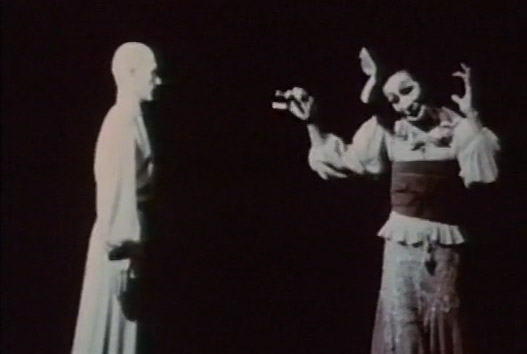