This makes me as nauseous as it does furious.  How any person could justify building a 27-story home (with a health club, dance studio, ballroom, movie theater, three helicopter pads, and underground parking for 160 cars) in a part of the world where so many people are in desperate need of help is beyond me.  I hope it falls into a sink hole abyss.  The Telegraph just profiled this piece of shit man and his piece of shit home:

Ambani, his wife and three children have moved into the building which is named Antilia, after a mythical Island. It contains a health club with a gym and dance studio, at least one studio, a ballroom, guestrooms and a range of lounges and a 50 seater cinema.  There is even an elevated garden with ceiling space to accommodate small trees.  The roof has three helicopter pads and there is also underground parking for 160 cars, which will come in handy for guests at Ambani’s forthcoming housewarming party.  From the top floors of the 173m high property are spectacular views of Mumbai and of the Arabian Sea.  The 53 year-old tycoon is not only the richest man in India but the fourth richest man in the world. In total there is reported to be 37,000 square metres of space, which is more than the Palace of Versailles. To keep it running smoothly requires 600 staff.  According to Forbes magazine Ambani, who owns much of Reliance Industries, the oil, retail and biotechnologies conglomerate, is worth £18bn. He used to help run the company before falling out with his brother.  The glass, steel and tiles used to make the building are reported to be from local sources.  Ambani does not appear to be influenced by calls by the Indian prime minister, Manmohan Singh, for business leaders to be “role models of moderation”. 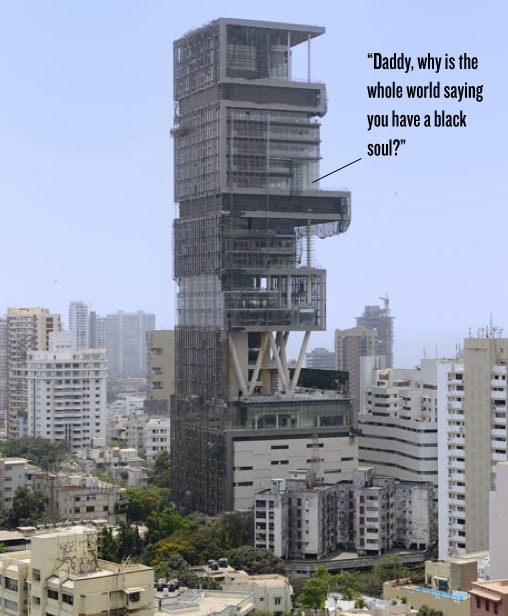