The New York Post broke this story about a painting kept behind the couch of Martin Kober in Buffalo, NY.  Upon his retirement, Martin dug into the old family story that the painting was an unfinished work by Michelangelo, the grand master of the Italian Renaissance.  As of now, all indications are that the work did indeed come from the revolutionary genius:

“It wasn’t the story that had scared me, but that it had been exposed to heating commonly found inside a middle-class home,” (art retorer/historian Antonio) Forcellino writes in his new book, “La Pieta Perduta,” or “The Lost Pieta,” published in Italy and due out in the United States next year.  The provenance, or ownership history, points to the work being done by Michelangelo around 1545 for his friend Vittoria Colonna. That was about 45 years after Michelangelo did his famed “Pieta,” or pity, sculpture of Mary holding Jesus, housed in St. Peter’s Basilica.  The Pieta painting was passed to two Catholic cardinals, eventually ending up in the hands of a German baroness named Villani.  The work ended up in the Kober family after Villani willed it to her lady-in-waiting Gertrude Young. Young was the sister-in-law of Kober’s great-grandfather and she sent the work to America in 1883, according to an account by Kober. Forcellino said Herman Grimm, a noted Michelangelo biographer, saw the “Pieta” in 1868 and attributed it to the master. Additional evidence includes a letter in the Vatican library discussing a Pieta painting for Colonna, he said. “I’m absolutely convinced that is a Michelangelo painting,” Forcellino said.

Read the full story at The New York Post. 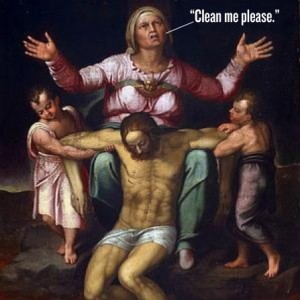