Why Is This Small Wooden Box Captivating The Entire World?

Came across this story on Grant McCracken’s website (via PSFK):

Mikal Hart built a magical box.  This box.  It’s a box that knows where it is.  It remains closed and locked until it is transported to exactly the right place on the planet.  Then it springs open.  If we push that button anywhere else on the planet, the book stays locked.  And a figure appears in the window.  It’s up to us to surmise that this is a measure in miles and that the box wants to go home.  We are allowed to push the button 50 times.  After that the box locks forever.

Mikal can’t quite figure out why the box is so interesting.  (See the Youtube video below.) He built the first one as a wedding gift for friends.

When word leaked out about Mikal’s box, the world went a little crazy.  He got calls from journalists all over the place.  The journalists can’t quite figure out why the box is so interesting either.

We’re all in the thrall of the box.

The magic of the box is not so much in the “what” and the “how” of the box.  it works on a principle that Mikal calls “reverse geocache.”   Geocaching gives us coordinates so that we can find a box.  Mikal’s geocache gives us a box so we can find coordinates.  Lovely and clever, but not quite magical.

The magic of the box is in the “why” of the box.  Specifically why it is we all find it so very arresting.

We know some of the the explanatory bits and pieces here.  Mikal’s box is a good demonstration of how we now use technology to reverse what Weber called the “disenchantment of the world.” There is also something mythic and medieval about the box. It’s as if this box can detect hidden correspondences and a secret order to the world.  We like the “new age” sound of this completely.  That the box conceals a secret, check.  That the box will only reveal the secret according to its agenda, double check.  And much more besides.

What I like particularly is the sensation we get when we first hear about the box.  It’s as if something has operated on the tumblers of consciousness.  Something seems to click.  We hear about the box and snap to.  We awaken.  We smile.  We are charmed.

This box has remote control.  We don’t have to have the box to feel its effect.  It makes journalists pick up the phone.  It makes bloggers fire up WordPress.  It makes the rest of us snap to.  This is the magic of the box.

From the amount of attention this simple wooden box is getting it’s clear its hit a nerve around the world.  Why do we care about this?  And why do so many people care so much?  I’m sure there are researchers in psychology that are having a field day with this right now.  Sometimes I really wish I had the knowledge that researchers in psychology have because this is one instance where I’d love to find out more.  I’m far more interested in people’s fascination with this box than the actual box itself.  Amazing. 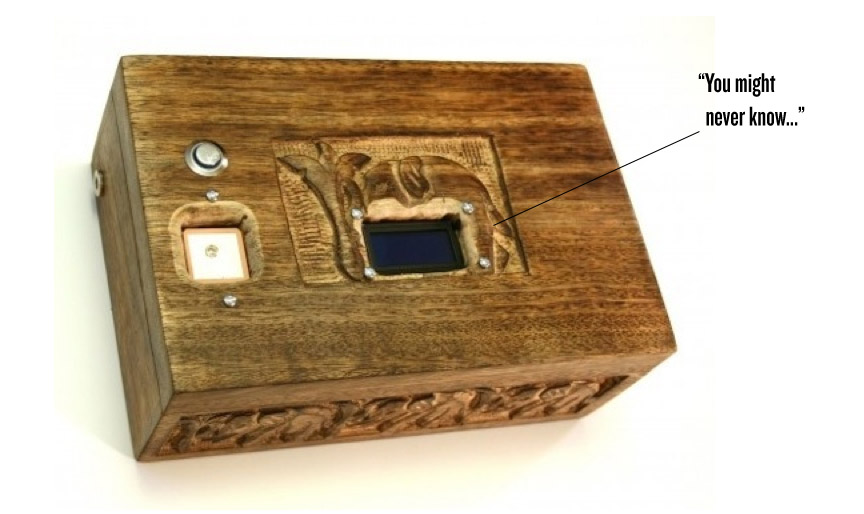