National Geographic Goes Inside “Superman’s Fortress” In Mexico, The Largest Crystals On Earth

National Geographic goes inside one of the greatest natural marvels on the planet – a giant crystal cave described as “Superman’s Fortress”, with magnificent crystals up to 36 feet long and weighing 55 tons. A team of experts venture into the cavern, enduring scorching-hot temperatures that could kill a human after just 15 minutes of exposure. They’ll push the boundaries of physical limitation to explore a crevasse that could lead to another – and perhaps more spectacular – crystal cave.

I wrote a piece on this cave a while back focusing on how it was made possible.  Scientists have proven that these gigantic crystals were formed by massive shifts in climate.  Read more on that here.

Stormchaser has a great description of the conditions inside:

The crystals themselves are made of selenite which is crystallized gypsum, the same material used in drywall construction.  Except these crystals formed over a span of about 500,000 years in a hot water solution, saturated with minerals.  The temperatures inside the cave remained very consistently hot for the entire time the crystals were growing.  It is still incredibly hot in the cave due to its proximity to a magna chamber deep underground.  The air is 50C with a relative humidity of over 90% making the air feel like an unbearable 105C (228F).  Entering the cave without special protective suits can be fatal in 15 minutes.  Even in specially designed suits it is nearly impossible to stay inside longer than 45 minutes.  In extreme heat, the body begins to lose higher brain functions which made the expedition much more difficult with the risk of falling into deep pits, or being impaled on a sharp crystal.  It is as dangerous as it is beautiful.

Watch the National Geographic video below, and also visit their website for more information.

BBC also went into the cave:

Christopher Reeve and Margot Kidder also went into the cave: 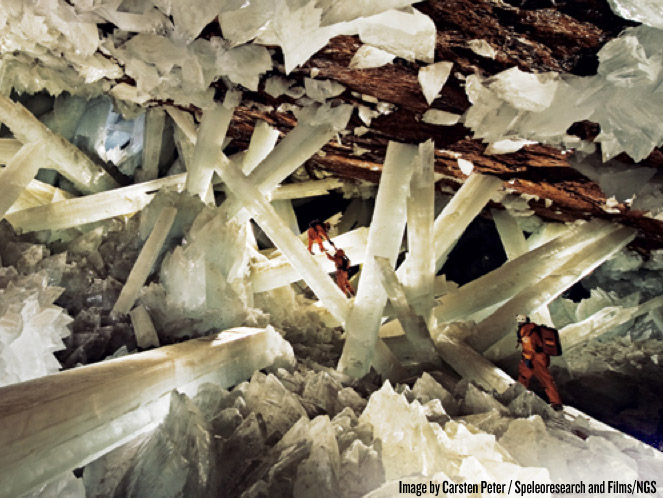 Previous post:
Dear Santa… Next Post:
The Top 16 Plants That Naturally Detoxify The Air In Your Home