Natalie Portman’s Dirty Secrets, And Her Ties To The Beginnings Of Facebook

I just got out from seeing “The Social Network“, the story behind the beginnings of Facebook, and it is a remarkable piece of work.  I don’t subscribe to the group of people who instantly disparage a work of art because the subject matter is popular (or in this case beyond popular).  What I love most about David Fincher is that he’s taken a story which at first thought would have appeared banal, and he transformed it into something exemplary and borderline mythological.  Furthermore, what I love the most about Facebook the company is how its creators did what every great inventor strives to achieve: they gave people something they didn’t even realize they wanted or needed.  And in the case of Facebook they wanted it REAL bad.

David Fincher is in fine form on this one using the same tone he crafted in “Zodiac”, as well as Aaron Sorkin who wrote the screenplay.  At a recent early screening of the film at Harvard University, Sorkin revealed that when Natalie Portman heard he was working on the film’s script she contacted him and said “Listen…come over for dinner and I’ll tell you some stories.”  Portman studied at Harvard from 1999-2003 and dated a member of the famous Porcellian Club which is at the center of the story’s (and Facebook’s) beginning.

The Porcellian is the iconic “hotsy-totsy final club,” often bracketed with Yale’s Skull and Bones and Princeton’s Ivy Club. A history of Harvard calls the Porcellian “the most final of them all.” Also, it is quietly understood that “if members of the Porcellian do not earn their first million before they turn 40, the club will give it to them.”

This was the club that Mark Zuckerberg (a fellow Harvard student) wanted so desperately to infiltrate, and eventually became entangled with back when the social networking site was merely an idea.

Sorkin said the inside information she gave him during that dinner was invaluable and was essential in breathing life into the story.  Portman’s inside account of what she encountered and what she saw made it all the way onto the screen in many scenes.  Portman also gets a tongue-in-cheek reference in the movie itself, when one character mentions that Zuckerberg became the hottest thing on a campus that included Nobel Laureates, Pulitzer Prizer winners, future Olympians, and a “movie star”.  But her name is never mentioned outright.

The film garnered a 97% rating on Rotten Tomatoes and is receiving cricial raves.  Facebook is valued at $33-billion and Forbes recently estimated Mark Zuckerberg to be worth $6.9-billion (Steve Jobs came in at a paltry $6.1-billion). 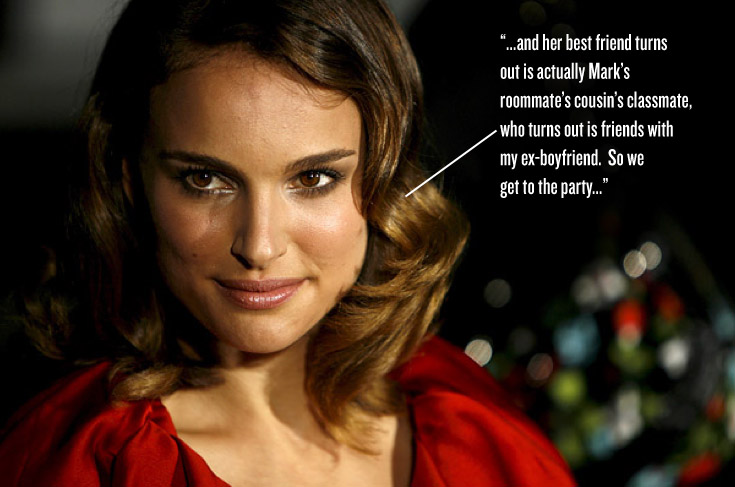 Previous post:
WARNING: This Video May Cause Extreme Jealousy Or Tingling Sensation In Genital Area (Or Both) Next Post:
Soundtrack To BBC’s “Life On Earth” (1979) Composed By Edward Williams Finally Available