“Between The Folds” Explores The Deeper Meaning Of Origami

I remember hearing about this film a while back but then it totally disappeared off the radar…just like so many things seem to do.  Then I stumbled upon the trailer for “Between The Folds” and saw it with new eyes.  The most fascinating thing about origami, compared to other arts, is that it is always about a singular piece of paper.  It isn’t added to or taken away from.  What’s more is the ultimate challenge of origami being the continued pursuit of the infinite possibilities of what one flat square can become.  It seems as though the film goes even deeper than that and touches on the powerful implications that the mathematics of origami is having on science,  industrial design, and even pharmaceutical research:

The trailer also reminded me of one of my newest fascinations (and if anyone knows anyone who knows how to do this please let me know) which is the art of the Temari thread ball.  A Japanese tradition, temari balls are a complex and detailed art form combining thread and geometry:

Historically, temari were constructed from the remnants of old kimonos. Pieces of silk fabric would be wadded up to form a ball, and then the wad would be wrapped with strips of fabric. As time passed, traditional temari became an art, with the functional stitching becoming more decorative and detailed, until the balls displayed intricate embroidery.

Temari are highly valued and cherished gifts, symbolizing deep friendship and loyalty. Also, the brilliant colors and threads used are symbolic of wishing the recipient a brilliant and happy life. Traditionally, becoming a craftsman in Japan was a tedious process. Becoming a temari artist in Japan today requires specific training, and one must be tested on one’s skills and technique before being acknowledged as a crafter of temari.

Traditionally, temari were often given to children from their parents on New Year’s Day. Inside the tightly wrapped layers of each ball, the mother would have placed a small piece of paper with a goodwill wish for her child. The child would never be told what wish his or her mother had made while making the ball.

Take a look at this one woman’s Flickr series displaying the talents of her 88-year-old grandmother’s Temari skills.  See the photos here. 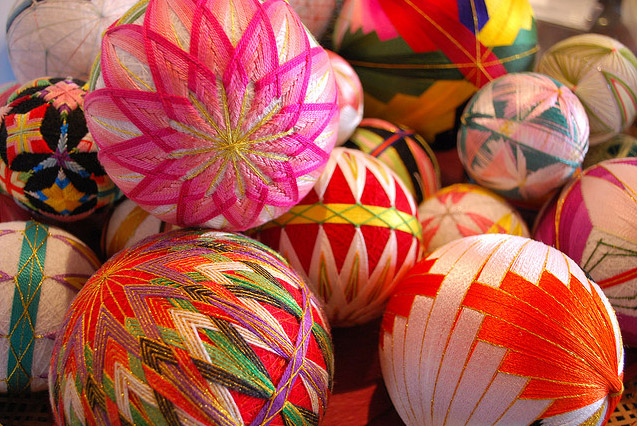