Brazilian filmmaker Gabriel Mascaro garnered worldwide critical acclaim when his film Neon Bull (Boi Neon) premiered at TIFF and Venice last fall. The film tells the story of a Iremar (Juliano Cazarré), a thirtysomething guy who works at the Vaquejadas, a rodeo in the northeast of Brazil. It’s dusty and back-breaking work, but Iremar is a natural vaqueiro — feeding, prepping and taking care of the bulls. His home is the truck used to transport the animals from show to show which he shares with his coworkers — Galega (an exotic dancer, truck driver and mother to her spirited and cheeky daughter Cacá) and Zé (his rotund compadre in the bull pen). Together they form a makeshift but close-knit family. But Brazil and the northeast are changing, and the region’s booming clothing industry has stirred new ambitions in Iremar. Swinging in his hammock in the back of the truck, his head is filled with unlikely dreams of pattern cutting, sequins and exquisite fabrics as he mentally assembles his latest sexy fashion designs.

In his review for The Hollywood Reporter, Boyd van Hoeij writes, “Instead of a straightforward narrative arc for the small cast of characters, the film — gorgeously shot and framed by Cemetery of Splendor cinematographer Diego Garcia — combines a documentary-like look at their everyday lives with a fascinating if not entirely clear-cut exploration of body and gender issues.”

And Eric Kohn of The Playlist writes, “While it premiered at the Venice Film Festival, Neon Bull took on striking definition in the context of the massive program at the Toronto International Film Festival, where it made its North American premiere. The Toronto lineup showcases an industry in constant battle mode, struggling to find commercial product and awards bait even as it acknowledges, with a new section, the game-changing evolution of television. Audience sensibilities keep shifting and the future of the movies remains uncertain. But Neon Bull provides a striking response to questions surrounding the precise nature of the movies. It’s a cinematic achievement that works on its own terms, beyond any semblance of marketplace pressure, and speaks to the unique power of the medium. Mascaro offers a window into a world that not only promises an original milieu, but invites viewers to become a part of it.”

Neon Bull opens at the Film Society of Lincoln Center in New York on April 8th as part of the series Gabriel Mascaro: Ebbs and Flows. The curators write, “The political and poetic meet in the incisive, richly textured films of Gabriel Mascaro. With an eye for indelible images and a keen understanding of often-invisible social structures, he has emerged in recent years as one of the foremost chroniclers of contemporary Brazil. In a career that’s straddled both documentary and narrative, Mascaro has probed his country’s class divisions, changing landscapes, and sexual norms—always with a fearless intellectual curiosity and a sensuous visual palette. On the occasion of his stunning new film, Neon Bull (a 2016 New Directors/New Films selection opening at the Film Society on April 8), we revisit the work of one of international cinema’s most exciting new auteurs.”
. 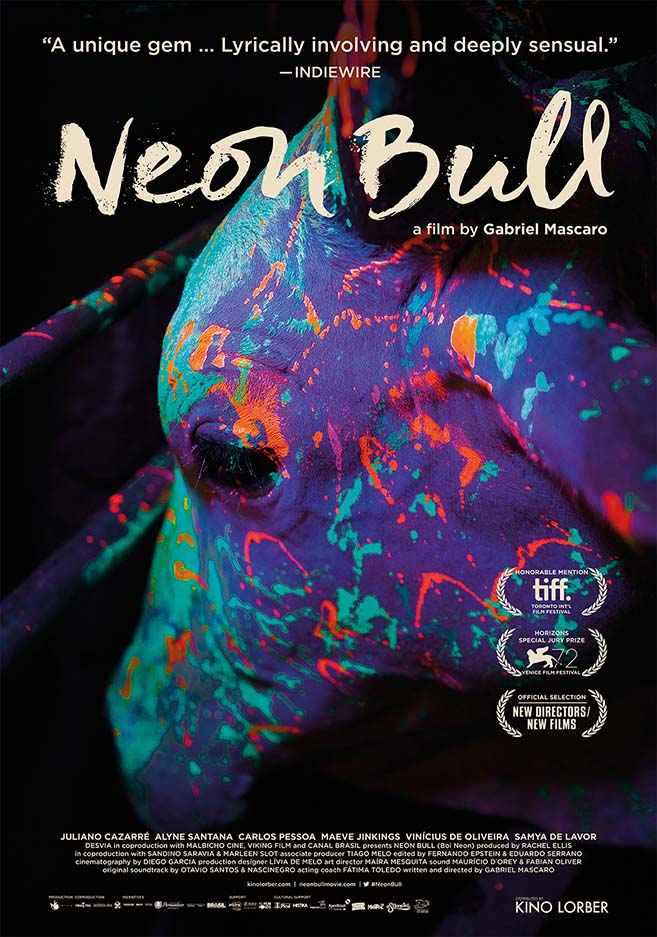