Is The Universe Infinite? Get Ready To Scratch Your Head After Watching This 3-Minute Explanimation

It the Universe infinite? It’s a question that has baffled mankind for ages, and with each new astronomical discovery we make, it seems to elevate the collective bafflement to new heights. The more we understand the less we understand. One ingredient to this puzzle is the fact that we know almost precisely how big the observable Universe is (13.772 billion years), but the size of the whole Universe is a huge unknown. Our best guess is the estimated distance light from the Big Bang has travelled in that time — roughly 46 billion light-years. After that we get into what’s known as the “cosmic horizon” (see Margaret Atwood’s brilliant explanation at the bottom of this post). What’s more, a new theory known as the Many Interacting Worlds Theory (MIW) is providing quantum evidence that there are multiple (possibly infinite) parallel worlds that exist and are physically interacting with our own at all times (i.e. infinity within infinity within infinity, etc.). Other observations of the outer edge of our visible Universe have detected “bruises” which indicate other Universes are bumping into the outer edges of our own like bubbles. You can watch the video above to learn more about the size of our Universe, and watch the video below to learn more about the MIW Theory. For more great stories about the Universe be sure to visit The Universe on FEELguide. (Image courtesy of NASA, ESA, the Hubble Heritage Team STScI/AURA, A. Nota ESA/STScI, and the Westerlund 2 Science Team via New Scientist) 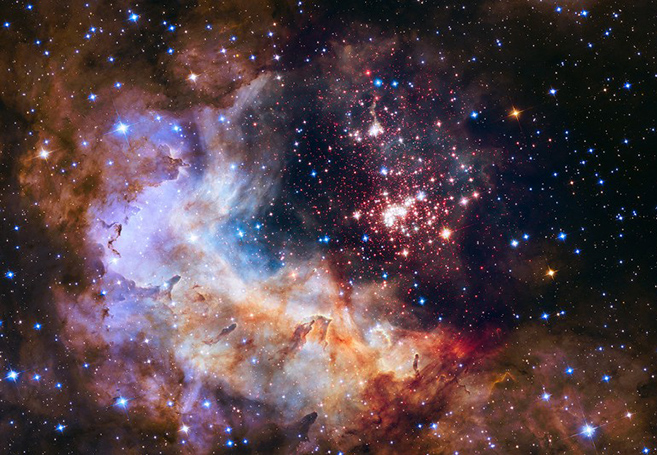