Novelist, producer, and director Alex Garland‘s highly anticipated sci-fi film Ex Machina is raking in critical acclaim and ★★★★★ reviews from around the world. Adding even more weight to the film’s kudos this morning is an exceptionally rare film review from the prestigious scientific trade publication New Scientist. “It’s a rare thing to see a movie about science that takes no prisoners intellectually. Alex Garland’s Ex Machina is just that: a stylish, spare and cerebral psycho-techno-thriller, which gives a much-needed shot in the arm for smart science fiction,” writes Anil Seth of New Scientist. “In his directorial debut, Garland has managed to capture the thrill of this adventure in a film that is effortlessly enthralling, whatever your background. This is why, on emerging from it, I felt lucky to be a neuroscientist. Here is a film that is a better film, because of and not despite its engagement with its intellectual inspiration.”

And in his equally glowing review for The Playlist, Oliver Lyttelton writes: “It might be his finest work as a writer so far, but Garland also suggests that he’s no slouch behind the camera either. He mostly avoids first-time-helmer showiness (beyond a few misjudged, distracting computer’s-eye-view shots) in favor of a rigorous, meticulous command of mood and atmosphere that’s reminiscent of David Fincher, leaving you consistently unsettled … It’s one of the headiest and most impressive sci-fi debuts since MOON, and if we see more than a handful of movies better than it across the next twelve months, 2015 will be a terrific year.” 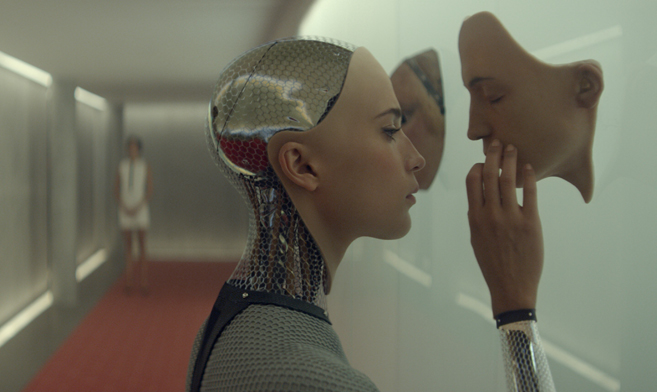