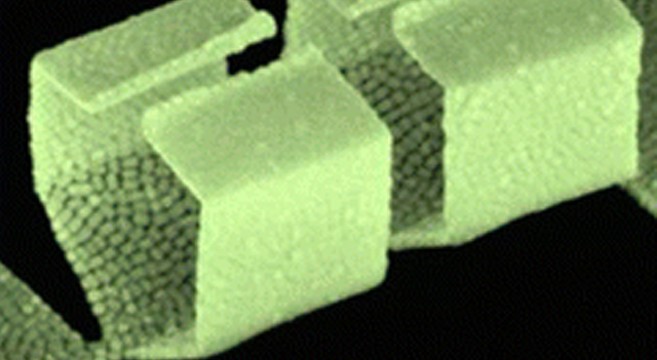 Researchers at Monash University have achieved what many physicists thought was impossible — they have created a material that is capable of “squeezing” light, seemingly defying the laws of physics in the process.  The details are incredibly complex, but the team has released a short abstract which describes the new material “plasmene”, sheets of gold that are one nano-particle thick and folded into tiny origami: “Plasmene [analagous to graphene] are free-standing, one-particle-thick, superlattice sheets of nanoparticles (‘meta-atoms’) from the ‘plasmonic periodic table’, which has implications in many important research disciplines.”

“Here, we report on a general bottom-up self-assembly approach to fabricate giant plasmene nanosheets (i.e., plasmene with nanoscale thickness but with macroscopic lateral dimensions) as thin as ∼40 nm and as wide as ∼3 mm, corresponding to an aspect ratio of ∼75 000. In conjunction with top–down lithography, such robust giant nanosheets could be milled into one-dimensional nanoribbons and folded into three-dimensional origami.  Both experimental and theoretical studies reveal that our giant plasmene nanosheets are analogues of graphene from the plasmonic nanoparticle family, simultaneously possessing unique structural features and plasmon propagation functionalities.”

The resulting material demonstrates some of the most bizarre and sci-fi-esque optical properties imaginable.  The groundbreaking material was discovered by coating gold and silver nanoparticles in polystyrene, suspending the particles in a chloroform solution, then spreading them over a fine mesh.  Because gold and silver are classified as “plasmonic” materials, they are capable of capturing light and moving it along their surfaces as waves of electrons known as plasmons.  Because the material is now able to be bent in such complex origami-like shapes, it is now possible to create ribbons of gold nano-fabric which will allow for invisibility cloak technology a-la Harry Potter, as well as groundbreaking new medical materials, wearable technology, powerful new solar panels, and much, much more.  For more amazing stories from the world of nanotechnology be sure to visit Nanotechnology on FEELguide. (Source: New Scientist).

SEE ALSO: The Magnetic Nanobot “Trucks” That Carry Medicine Straight To Your Brain Through Your Blood
SEE ALSO: Engineers Invent Nanometal That Can Change From Being Hard To Soft At The Flip Of A Switch
SEE ALSO: The WOW Files: Microscope Video Shows Tiny Gold Motors Being Driven Around Inside Cancer Cells

Previous post:
Happy 54th Birthday To Tilda Swinton, The One And Only Queen Of FEELguide Next Post:
Watch One Young Girl’s Story Of Cancer & Basketball Bring The Entire CBS News Team To Tears